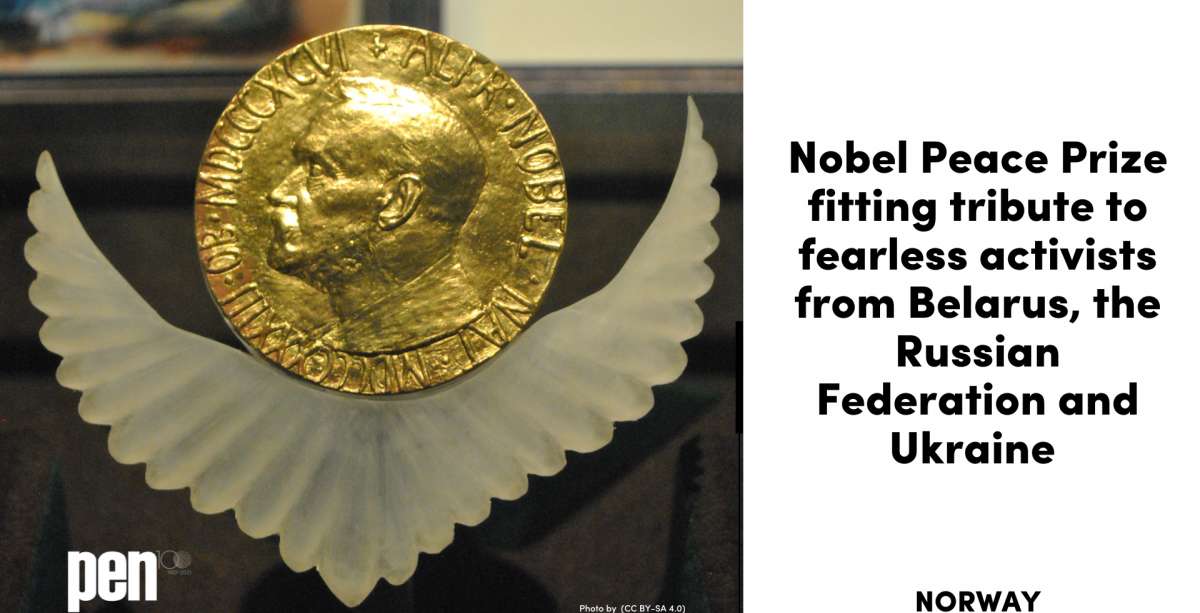 ‘PEN International warmly welcomes the decision of the Norwegian Nobel Committee to award this year’s Nobel Peace Prize to Ales Bialiatski, Memorial, and the Center for Civil Liberties. It is a fitting tribute to their tireless work in support of freedom of expression and human rights in Belarus, the Russian Federation and Ukraine – where repression and violations persist.

The PEN Community has been campaigning for Ales Bialiatski, a PEN Belarus member, since he was first arrested in July 2021. Today, we once again urge the Belarusian authorities to release him immediately and unconditionally, and to drop all charges against him. We reiterate our solidarity with the brave people of Belarus, who continue to fight for their human rights despite the authorities’ relentless campaign to crush all dissent.

A year ago, we condemned the Russian authorities’ decision to shut down Memorial International Society and Memorial Human Rights Centre, two of the most respected rights organisations in the country, as an assault on independent civil society. Today, we continue to stand with Memorial and its fearless activists and urge the authorities to repeal laws stifling free expression and association.

Just a few days ago at our 88th World Congress in Uppsala, Sweden, the PEN community united in one voice to utterly condemn the violence unleashed by Russian forces against Ukraine and to urge the Russian Federation to immediately end the war in Ukraine. We stand with our friends at the Center for Civil Liberties and PEN Ukraine and command their extraordinary strength and resolve.’

On 27 February 2022, PEN International released a letter signed by over 1000 writers worldwide – including Nobel laureates Svetlana Alexievich, Orhan Pamuk, Maria Ressa, Olga Tokarczuk and Mario Vargas Llosa – expressing solidarity with writers, journalists, artists, and the people of Ukraine, condemning the Russian invasion and calling for an immediate end to the bloodshed.