Review of infringements of linguistic rights in Belarus from January, 1st, to June, 30th, 2022 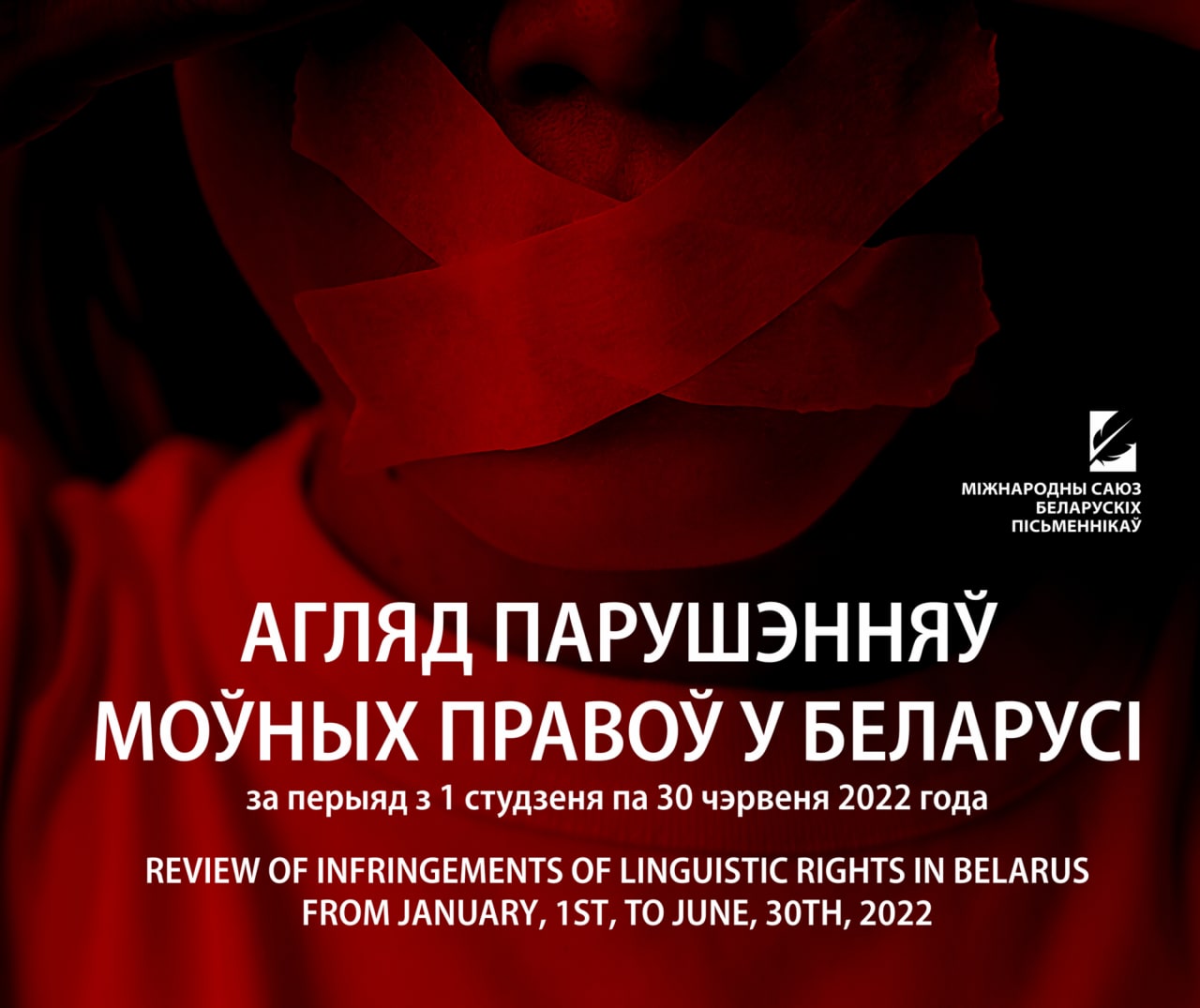 This survey is prepared by the association "International Union of Belarusian Writers".

The following survey leans on:

The purpose of the following review is to demonstrate the condition and place of the Belarusan language in society in order to protect and preserve this language, to develop and spread it as a basic component of Belarusan national culture. This review is needed because the equality of the languages provided by the legislation is not being observed by the Belarusian state, which obviously prefers Russian, – in this connection the existence of the Belarusian language is under the threat of destruction in various spheres of its functioning:

While preparing this review, we leaned on the official data of the population census (1999 and 2019), the data of official statistics and sociological polls as of 2020.

Since the beginning of the political crisis in 2020 in Belarus, it is impossible to receive any official statistical data or to carry out a full-scale independent sociological poll, including, questions on languages. On the eve of the 2020 election, practically all independent research centers were deprived of their licenses or did not receive it; and even the mass media were forbidden to carry out simple polls on socio-political topics. Also, since 2020, the National Statistical Committee of Belarus closed almost all official information.

Therefore, the language discrimination review of the first six months of the year 2022 was made on the basis of open sources.

We publish its results:

In February 2022, it became known that the administration of corrective colony №3 pressurized Uḷadzimir Curpanaŭ (condemned by Article №391 (insult to a judge) and Article №415 (evasion from service of sentence in the form of freedom restriction) of the Criminal Code of Belarus (CC); recognized a political prisoner on 10 February 2021) and put him in a punishment cell because in the corrective colony he spoke Belarusian and demanded the same from its employees. The administration of the colony refused Curpanaŭ’s demand to prepare the documents on his criminal case (Article №415 CC) for the court in the Belarusian language. During the consideration of the criminal case in the court of the Viciebsk Region on April, 20th, 2022, they refused Curpanaŭ’s demand to have this process conducted in Belarusian.

During the event of state importance – the referendum that occurred on February, 27th, 2022 – commissions had no bulletins in the Belarusian language.

In February, bookstands of libraries prepared for the Day of the Belarusian language could have no books in the Belarusian language. All seven videos that demonstrate the touristic potential of Belarus as a whole and of each Region, created by the National Agency of Tourism, first of all, for Belarusians (according to the words of the chief of the Department of Marketing), had only Russian and English versions.

In February 2022, Aleh Kuleša (condemned by Article №342 CC (organization and preparation of actions that violate public order or active participation in them); recognized a political prisoner on June, 15th, 2021) sent a letter, in which he says that the administration of corrective colony №2, in which he serves his time, carried out explanatory actions to inform that in correctional facilities it is necessary to speak exclusively Russian.

On 10 March 2022, artists Aleś Cyrkunoŭ and Vital Borys were arrested for 15 days in the premises of the Minsk City Court because they spoke Belarusian. They came here to support artist Aleś Puškin whom on March, 30th, 2022 the court recognized guilty according to Articles №130 (abuse of the state symbols) and №370 (stirring up hatred) CC and sentenced to 5 years of disposal of freedom in a high security colony (Aleś Puškin was recognized a political prisoner on April, 6th, 2021). The two artists also had images of the national coat of arms Pahonia.

In March 2022, Siarhieï Moŭčan, a teacher of physical training at the Physics Department of Belarusian State University, was fired because he started to conduct his lessons in Belarusian.

In April 2022, the director of the manufacturer of alcoholic beverage products – the Homiel alcoholic beverage factory “Radamir” – in reply to an inquiry of lawyer and human rights defender Ihar Sḷučak, who asked him to mark their production in the Belarusian language, refused and said that in Belarus the Russian language dominates.

Journalist Jaŭhien Mierkis says that in many stores in Homiel employees do not want to serve buyers who address them in the Belarusian language. The same concerns doctors, too.

“they did not address in time to the Ministry of Information with a notice that they changed the data that are to be included in the state register of publishers, manufacturers, and distributors of print media”.

On May, 16th, 2022, the Main Directorate for Combating Organized Crime and Corruption of the Ministry of Internal Affairs searched the just opened bookstore Knihaŭka of the publishing house Januškievič, where books mainly in the Belarusian language were on sale. 200 books were sent to be examined as for the presence of signs of extremism. Andreï Januškievič and Nasta Karnackaïa (an employee of the publishing house, literary observer, blogger) were arrested.

We consider it very important to collect and publish cases of such linguistic discrimination because nowadays more than ever the Belarusian language is under the threat of disappearance. We will steadfastly watch the condition of the Belarusian language and compile such surveys not less often than once in six months. Therefore, if you have linguistic discrimination examples that are not present in this review, please, send them to us at any time to our address – [email protected]