Chronicle of Human Rights Violations in the Cultural Sphere (May 16-31, 2022) 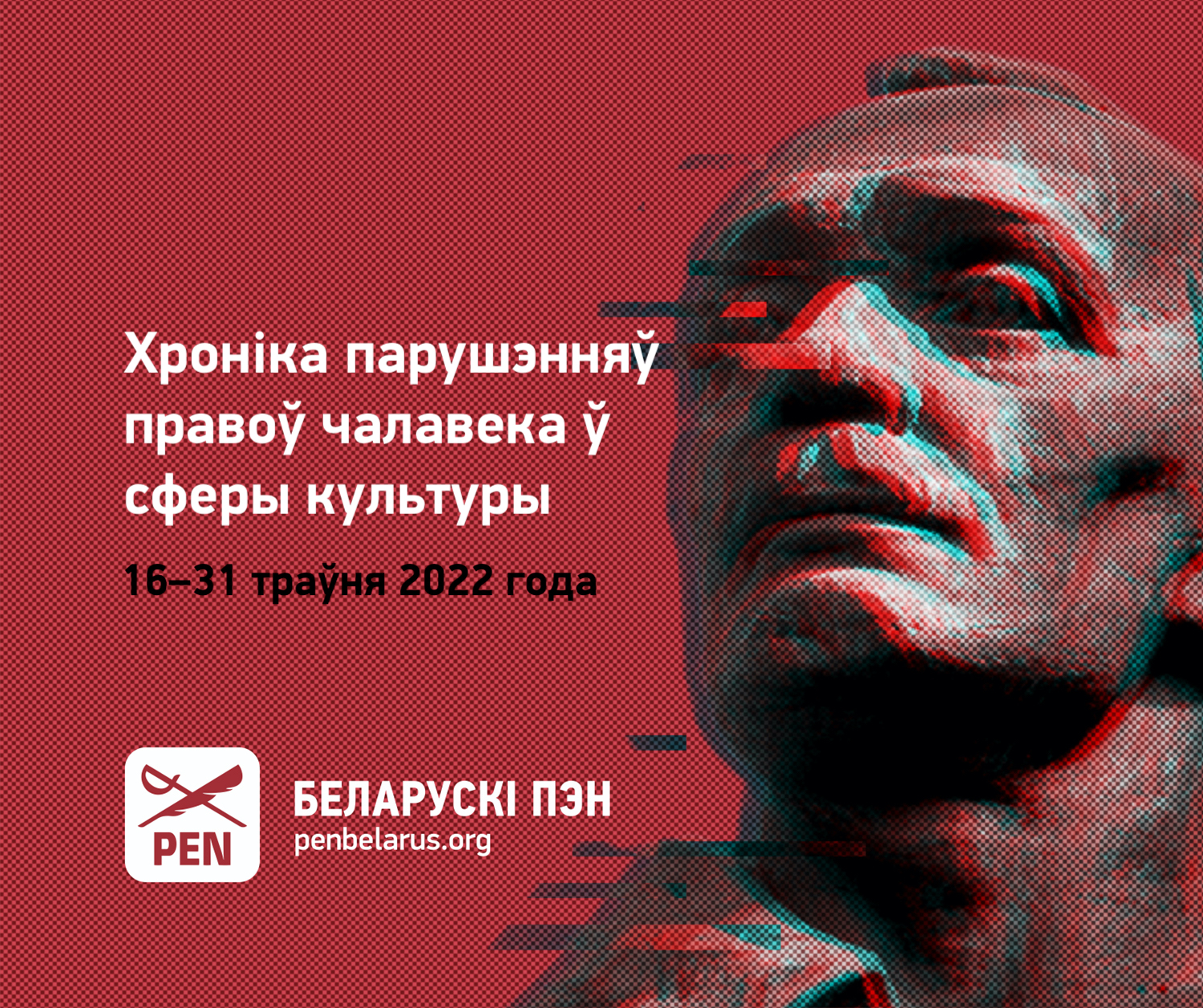 Between May 16 and 31, 2022, authorities persecuted independent book industry in Belarus: Andrei Yanushkevich, a publisher, and Nasta Karnatskaya, a publishing house employee, a literary columnist and a blogger, were detained during a search in the “Knihauka” bookstore. Yanushkevich was arrested for 10 days, Karnatskaya – for 13 for alleged petty hooliganism. Andrei Yanushkevich and Nasta Karnatskaya were not released after administrative arrests. A novel by Alhierd Bakharevich “Dogs of Europe” has been included into the list of extremist materials. Authorities continue conducting politically motivated arrests of cultural figures, dismissing people for their civil position, repressing for anti-war stance, as well as persecuting cultural figures forced to leave Belarus and their relatives.

I. Repressions against the independent book industry in Belarus

1. On May 16, 2022, pro-government propagandists came to the “Knihauka” bookstore in Minsk, which had opened that day, and, recording the conversation on a video camera, publicly blamed the publisher Andrei Yanushkevich for selling “wrong” literature.

Andrei Yanushkevich was accused of an “openly anti-state activity.” A number of insulting articles about the work of the store, authors and books sold there appeared in the propaganda media. The bookstore was searched in the afternoon of the same day. During the search, 200 books were seized, 15 of which were sent for examination for signs of extremism. Andrei Yanushkevich, the publisher, and Nasta Karnatskaya, a publishing house employee, a literary columnist and a blogger, were detained during the search in the “Knihauka” bookstore. Yanushkevich was arrested for 10 days, Karnatskaya – for 13 for alleged petty hooliganism. Andrei Yanushkevich and Nasta Karnatskaya were not released after the administrative arrests. In practice, this could mean another administrative arrest or a criminal case. The situation is complicated by the fact that lawyers remain under a non-disclosure agreement, which creates an information vacuum and does not allow to clearly understand the legal status of the people in prison and their whereabouts.

2. On May 17, a novel by Alhierd Bakharevich “Dogs of Europe” was included into the list of extremist materials. This was reported by the Ministry of Information. The Minsk district court recognized Bakharevich’s novel as “extremist”.

3. On May 30, it became known that books by the “Yanushkevich” publishing house had been removed from the shelves of the “Akademkniha” bookstore in Minsk.

2. On May 21, it became known that Andrei Pavuk, a blogger, a musician, a composer and a songwriter, is charged under a new criminal case. Police telegram channels reported that a case had been instituted against Andrei Pavuk for insulting a judge of the Chachersk district.

1. On May 17, Volha Afanasyeva, a leading researcher of the branch of the Vetka Museum of Old Believers and Belarusian Traditions, was detained at her workplace in Homiel. Volha Afanasyeva holds a Master’s degree in theology, works with the museum collections of holy pictures, takes part in a civil campaign “Murdered, but not forgotten”, which commemorates the victims of 1917-1950s repressions, and voices out her anti-war position. Volha Afanasyeva’s administrative case ended with a fine.

2. On May 22, in Novalukoml, a graphic designer was detained for writings in support of Ukraine; he wrote “Glory to Ukraine” and “Russian warship, go *****” on a heating pipeline, and he painted a white-red-white and a Ukrainian flags on a military cannon under Chashniki, near the village of Staryia Lauki.

3. On May 25, police detained Aliaksandr Dzemidovich, a commercial director of the network of cinemas “Silver Screen”. Aliaksandr Dzemidovich was accused of “disobeying a lawful order or requirement of an official” (Art. 24.3 of the Code of Administrative Offenses). The court decision was 15 days of arrest.

1. On May 24, it became known that Tatsiana Mushynskaya had been fired from the magazine “Mastatsva”; she was asked to write a letter of resignation by agreement of the parties. Tatsiana Mushynskaya is a writer, a theater critic, a journalist, a librettist, a playwright, a screenwriter, and the mother of a political prisoner Yahor Martsinovich, the editor-in-chief of “Nasha Niva” newspaper.

V. Repressions against cultural figures who were forced to leave Belarus, as well as their relatives

1. On May 23, Mariya Bulavinskaya, an historian, a director of documentaries about culture, and a defender of wooden architecture of Homiel, wrote on her Facebook page: “There was a search in the village house that we had been planning to restore. I bought a small house in a village of Homiel district in 2019. We planned to restore it on our own: to replace the wreaths that had rotted, to restore the carved decor. We had managed to do only the preparatory work. The search was reported by local residents. It happened last week. According to locals, there came border guards and police officers. Now the house is sealed with an ordinary tape. Through the windows, you can see that everything is scattered there. No official search papers were left. There are no seals on the taped doors. There are no signs that it was an official search. People say they took something out of the house. What exactly is unknown. I am indifferent to material things now. I feel sorry only for the historical artifacts. They say that the shutters in the house got suddenly bent and the doors are smashed”.

2. On May 26, there was a search in the Belarusian flat of Andrei Pavuk, a blogger, a musician, a composer and a songwriter, in Aktsiabrski village, Homiel region. A video of the condition of the apartment after the search was published in a police telegram channel; the apartment looked destroyed.

3. On May 26, Aliaksandr and Aliena Liauchuk, the parents of a singer Marharyta Liauchuk, were detained in Stradzech village, Brest district.​

1. On May 30, it became known that the “400 squares” gallery in Hrodna had been closed. They refused to extend the lease agreement with the gallery. The art gallery “400 squares” had existed for a year. At the end of April, the authorities closed an exhibition “SCULPTURE”, which had been launched on April 29 in the gallery.