Chronicle of Human Rights Violations in the Cultural Sphere (May 1-15, 2022) 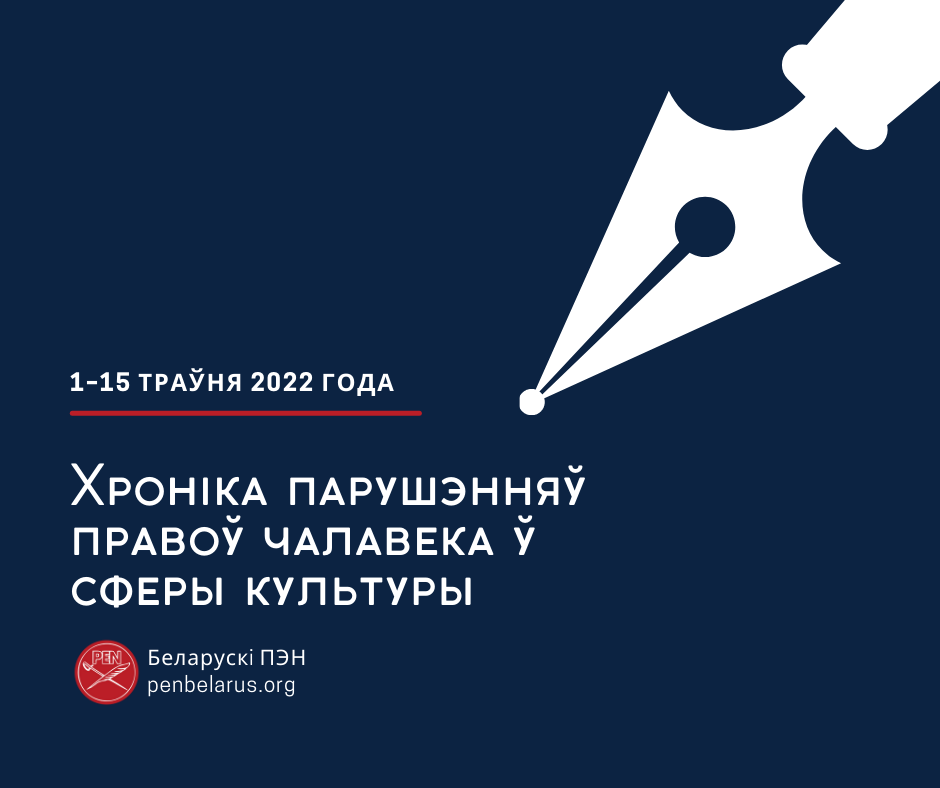 Between May 1 and 15, 2022, authorities continued to impose criminal sentences on the participants of the 2020 peaceful protests. Among the convicts, there is an actress, a designer and a teacher of the Russian language and literature. Investigation into the criminal case of a sociologist Tatsiana Vadalazhskaya has been completed and the trial date can be determined within a month. Political prisoners continue to be restricted in their correspondence, which is deepening their isolation. The Ministry of Information has suspended the activities of publishing houses Limarius and Knihazbor for three months starting May 16. An exhibition of contemporary sculpture in Hrodna was closed due to censorship, and 42 artists were barred from participating in the Art-Minsk festival at the last minute due to their civic stance.

1. ​On May 7, a 2D artist Halina Semechka ​was convicted in the Soviet court of Minsk under two articles of the Criminal Code: Part 1 of Art. ​342 (participation in actions that grossly violate public order) and Part 1. Art. 317.2 (driving a vehicle by a person who does not have the right to drive). Halina Semechka, a 2D artist from Vizor Games, was detained on December 14, 2021. She was sentenced to 3 years of “home chemistry” and released in the courtroom.

4. On May 10, the Minsk City Court heard an appeal against the sentence of a journalist and a writer Aleh Gruzdzilovich and decided to leave the sentence in effect. Aleh Gruzdzilovich is the author of a non-fiction book “Who blew up the Minsk metro?” about the events surrounding a terrorist attack in the Minsk metro on April 11, 2011. In the summer of 2020, he covered mass protests in Belarus. In August 2020, he was deprived of accreditation by the Ministry of Foreign Affairs. On March 3, 2022, the Savetski District Court of Minsk ruled in the criminal case of Aleh Hruzdzilovich: 1.5 years of imprisonment in a penal colony and a fine of 56,000 rubles. For streaming from a peaceful protest rally, Aleh Hruzdzilovich was found guilty of “organizing and preparing actions that grossly violate public order, or active participation in them.”

1. A local historian from Baranavichy Uladzimir Hundar has had all his correspondence confiscated in prison. Uladzimir Hundar is a suspect under Part 1 of Art. 285 (creation of a criminal organization) and Part 2 of Art. 357 (attempt to seize state power in an unconstitutional way).

2. A political prisoner, a writer and a former student of the BSU Faculty of Philosophy Kseniya Syramalot was forbidden to visit the theater and the gym in the colony. Kseniya Syramalot is a participant of the “students’ case”.  On July 16, 2022, she was sentenced to 2.5 years in prison. She has been serving her term in Homel penal colony № 4 since October.

3. The administration of a colony in Horki continues to destroy letters sent to Mikola Dziadok, an imprisoned author of non-fiction.

1. On May 16, the Ministry of Information suspended activities of publishing houses Limarius LTD and Knihazbor private enterprise for 3 months. The reason for the suspension of the activity, according to the Ministry of Information, was failure to notify the departments timely of changes of information that is subject to inclusion in the State Register of Publishers, Producers and Distributors of Printed Publications.

Knihazbor publishing house is known as the initiator of the Belarusian Book Collection project. Knihazbor has been operating since 1995, specializing in publishing classical and modern Belarusian literature and literature about Belarus.

1. An exhibition of modern sculpture, which was to run until the end of May, has been closed in Hrodna. The exhibition opened on April 29 and lasted for only four hours after its launch in the gallery “400 squares”, based in the shopping and entertainment complex “Triniti”. Pro-government activist Volha Bondarava demanded to close the exhibition, as some participants of the exhibition were known for their “anti-government statements”. As the curator of the exhibition Ivan Artsimovich comments, it was suggested to exclude some of the works, but he did not agree with this suggestion: “I do not think it is right to exclude any of the authors (or some of their works) from the exhibition for completely contrived reasons voiced by non-professionals.”

2. On May 12, it became known that 42 works by 42 artists were not allowed to take part in the Art-Minsk festival in the Palace of Art in Minsk. Among them, there was Andrei Ravyakau, Aliaksandr Belsky, Nadzeya Leanovich, Kirill Khlopau, Slava Navaslausky, Anya Radzko, Hanna Silivonchik, Liza Khikhlushka and others.