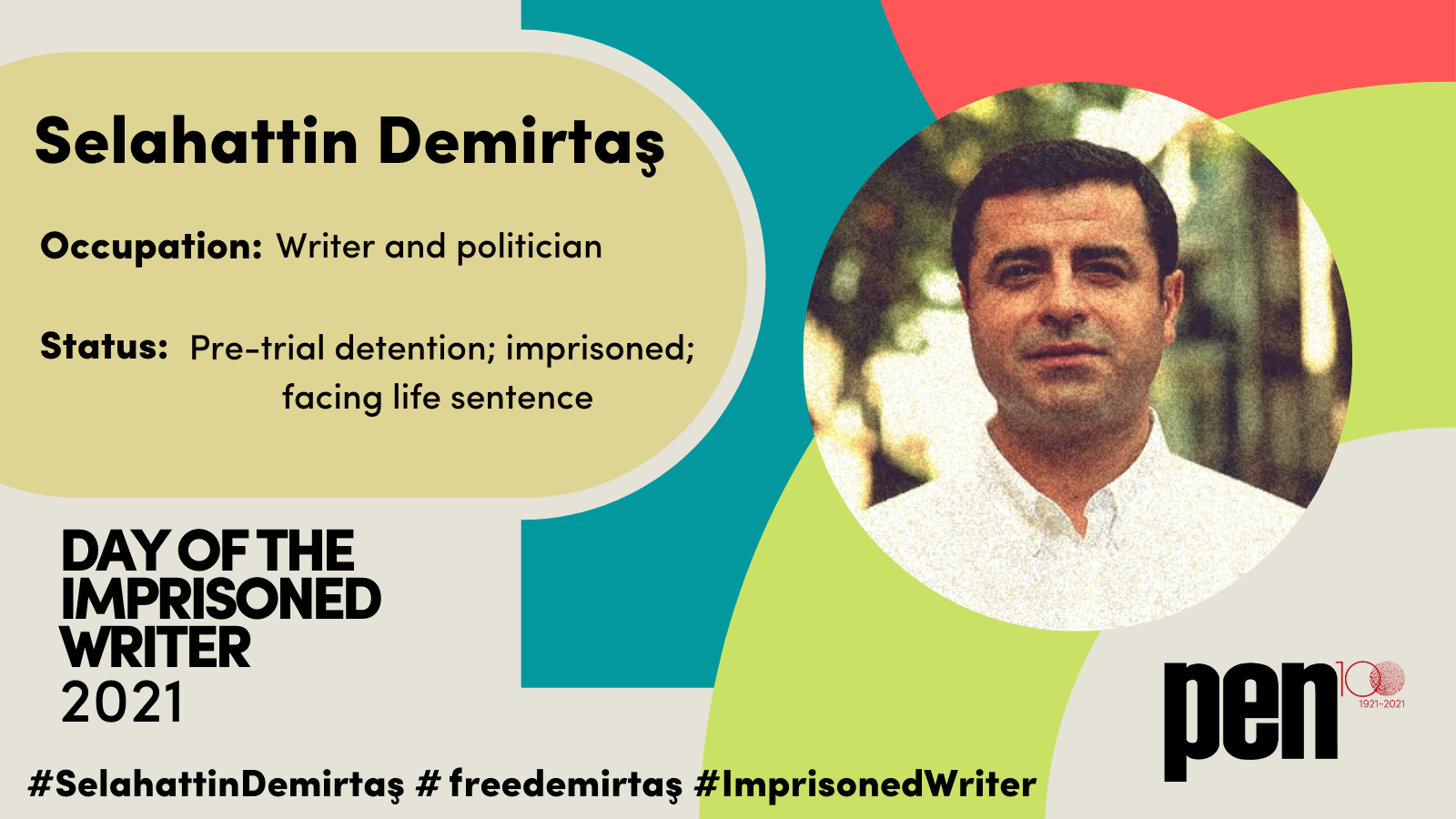 Selahattin Demirtaş is a writer and former co-chair of the pro-Kurdish Peoples’ Democratic Party (HDP).

Demirtaş was arrested on 4 November 2016, alongside several HDP MPs, on charges of being a leading member of a terrorist organisation, spreading terrorist propaganda, praising crimes and criminals and inciting public hatred and hostility. The evidence used against him consists largely of his political speeches and press statements and lacks any compelling evidence of criminal activity. To date, the Turkish authorities have failed to implement a December 2020 ruling by the Grand Chamber of the European Court of Human Rights, which ordered Demirtaş’ immediate release. The Grand Chamber was ruling on an appeal of a landmark judgement issued by one of the Court’s regular chambers in November 2018, which found that his arrest and pre-trial detention pursued an ulterior purpose, namely to stifle pluralism and limit freedom of political debate.

In a separate case, on 7 September 2018, Demirtaş was sentenced to four years and eight months in prison for allegedly carrying out terrorist propaganda during a speech he gave in 2013. Shortly before the Grand Chamber hearing, Demirtaş’ release from pre-trial detention was ordered, but he remained in prison due to this separate case. His sentence was upheld by the Court of Cassation on 26 April 2021 and became final that day.

New terrorism charges were brought against him on 20 September 2019, as part of a probe into deadly protests that took place across Turkey from 6 to 9 October 2014, which began over accusations that the Turkish army stood by as Islamic State militants besieged the Syrian Kurdish town of Kobane. Demirtaş stands accused of having organised those protests through his political statements and social media posts, and is being held responsible for all offences allegedly committed during the clashes. Charges against him include undermining the unity and territorial integrity of the state, homicide, robbery and damage to property. On 7 January 2021, a Turkish penal court approved the indictment against him and on 25 May 2021 this case, known as the Kobane trial, was merged with his main trial which was the basis of his initial pre-trial detention. He faces life in prison without the possibility of parole.

Demirtaş is being held in Edirne prison, western Turkey, over 1600km away from his loved ones in Diyarbakır.

While in prison, he wrote a collection of short stories entitled Seher (Dawn), which instantly became a best-seller and was translated into scores of languages, notably being awarded a PEN Translates award by English PEN. His latest book Devran was published in 2019. Demirtaş is an honorary member of German PEN and PEN Català.

The Turkish authorities must immediately release Selahattin Demirtaş and quash his conviction, in accordance with the ruling of the European Court of Human Rights and end all ongoing criminal proceedings against him.