“I Plead Not Guilty!” Belarusian Culture In Sociopolitical Crisis: October 25-31, 2021 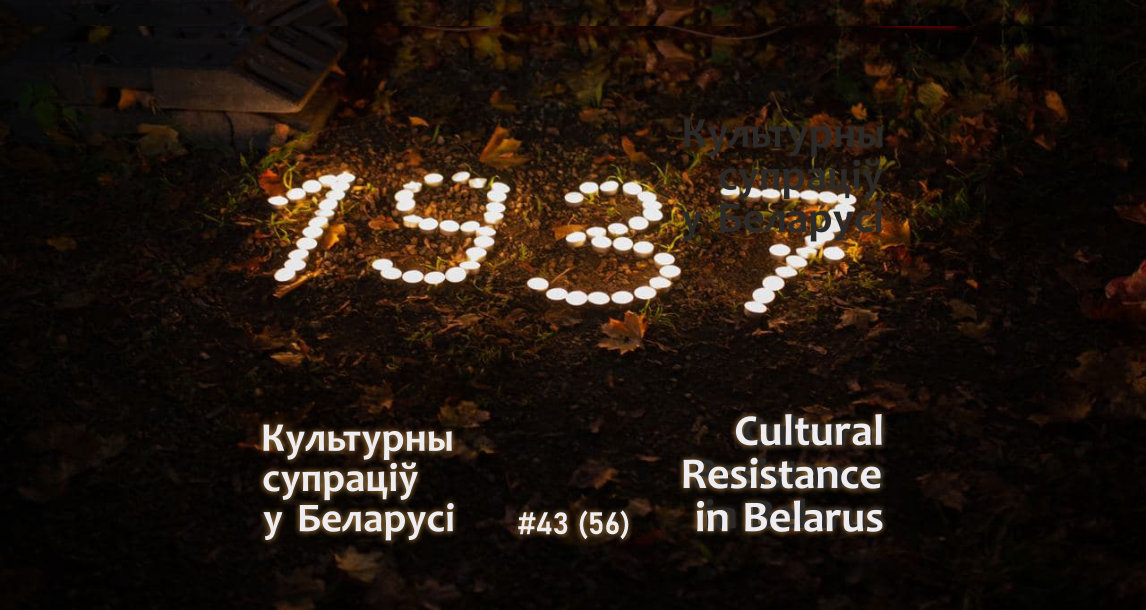 Download the pdf-version of issue 56 of Cultural Resistance Monitoring

Monitoring of violations of cultural and human rights against cultural workers in Belarus. January-September 2021

PEN Belarus prepared a regular report based on the monitoring of cultural and human rights violations against cultural workers in Belarus. The document contains statistics regarding these violations. It is based on open source information and communication with cultural workers between January and September 2021. 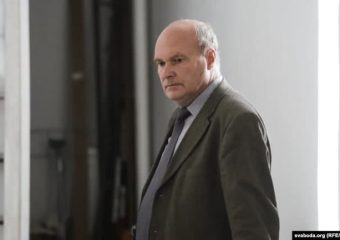 Ihar Kuźniacoŭ, historian, one of the top professors at the Belarusian State University, author of 120 books, including textbooks and manuals, was tried on October 27 based on 17 denunciations for his publications and reposts on social networks. The trial lasted one minute, the case was sent for revision. Ihar was fired from the Belarusian State University on the same day.

Zmicier Šymanski, a musician detained on August 2 under Art. 342 of the Criminal Code — Organization or active participation in group actions that grossly violate public order — for playing at the peaceful rally on August 16, 20 in Minsk, was sentenced to three years in an open air prison.

On October 28, Arciemij Nikicienka was sentenced to 15 days of administrative arrest for two white bracelets he had on one arm and one red bracelet on the other. 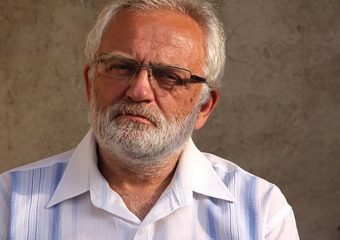 Vadzim Sarafanaŭ was sentenced to 15 days of administrative arrest for a white-red-white ribbon attached to the rear-view mirror in his car.

Taćciana Alaškievič was sentenced to 13 days of administrative arrest for allegedly tieing  white-red-white ribbons on trees.

Texts and statements of Uładzimir Mackievič, philosopher, methodologist, co-founder of the Flying University, author of books and publications, were sent for examination to identify signs of incitement to racial, national, religious, or other social hatred. Uładzimir was detained on August 4 and charged with organizing actions that grossly violate public order. 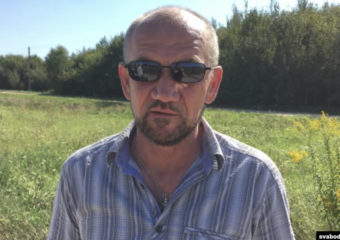 Uładzimir Hundar, local historian and publisher, has been kept in the pre-trial prison in Brest since spring 2020. He has one leg, but was not allowed to have his  prosthetic leg, he uses crutches. Like other political prisoners, he was labeled as “prone to extremism.” In one of his letters to his wife Uładzimir writes,

“It’s not living that I’m afraid of, I love my life. What scares me is that I may not live to see freedom… I avoid thinking about it.”

Ihar Bancer, political prisoner musician, who was sentenced to 1 month and 25 days in a colony for violating the open air prison rules, is back to the open air prison — his lawyer appealed the court’s decision to change the sentence to a harsher one.

Political prisoners’ art behind the bars. 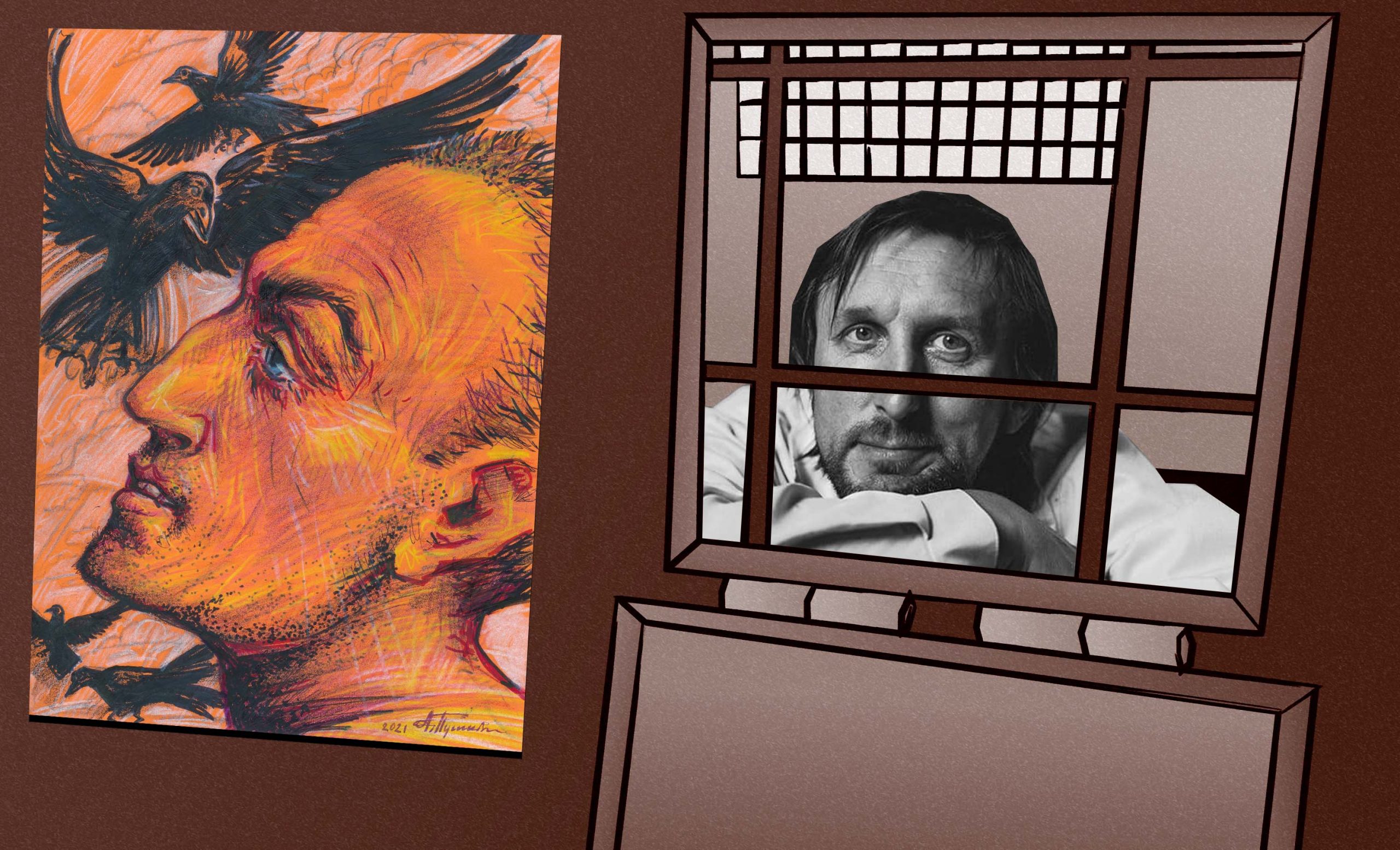 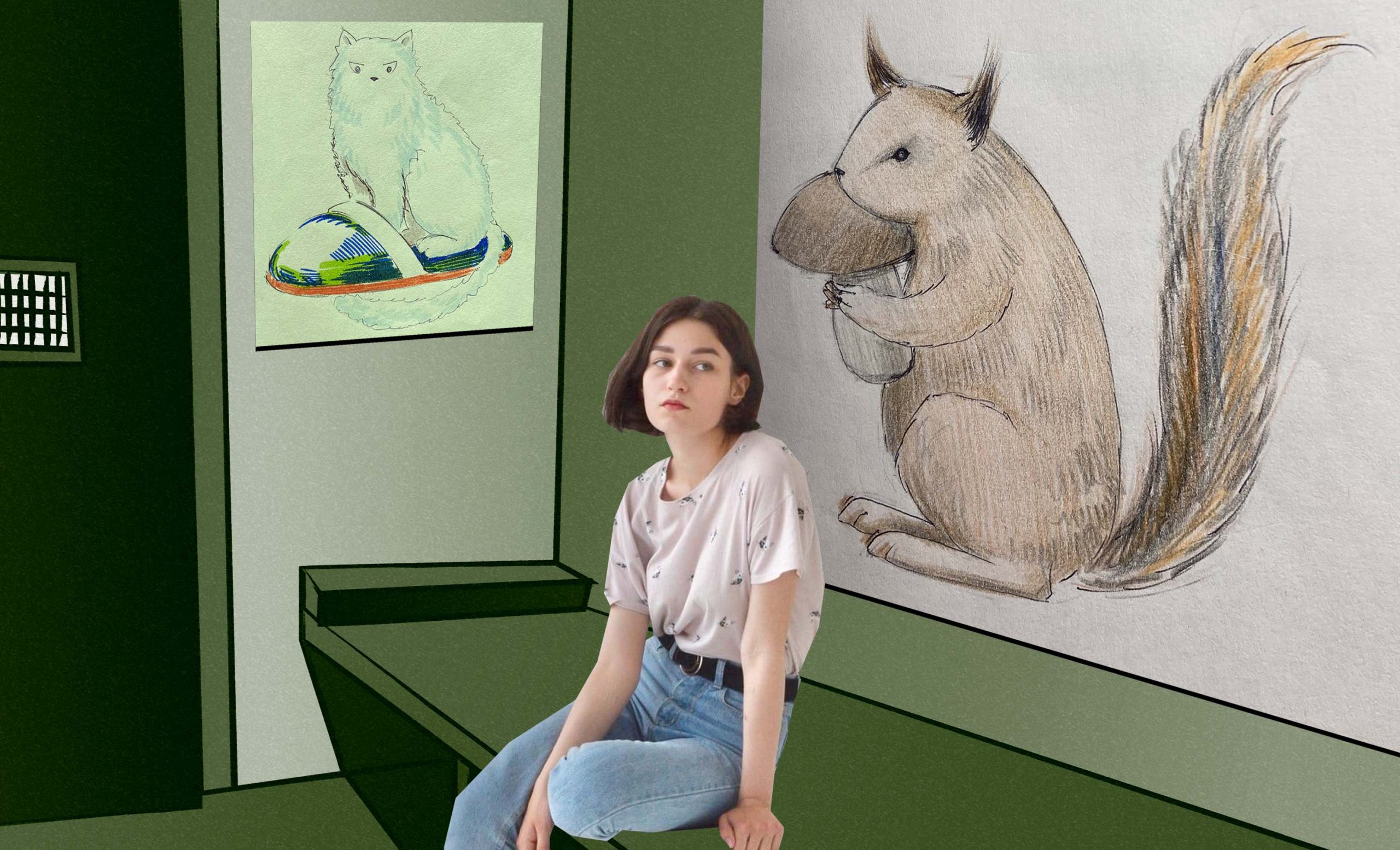 A lecture on painted carpets, traditional for Belarus in the first half of the 20th century, took place in Warsaw.

Classes of the School of Belarusian Tradition took place in Bialystok. 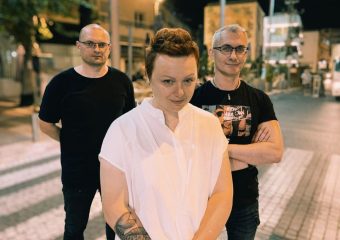 The well-known Belarusian band Петля пристрастия, whose leader Illa Čarapko-Samachvałaŭ served 15 days of administrative arrest for participating in the march in November 2020, has released a new album Не тот человек. From 2020, the band hasn’t been able to receive a touring license to perform in Belarus.

Hanna Hitryk, a former actress of the Yanka Kupala Theater, a musician who moved to Israel with her family some years ago, presented her new album Shadow — the first after moving.

The novel “Смерти.нет” by Tatiana Zamirovskaya, a Belarusian writer who now lives in New York, was shortlisted for the Andrei Bely Prize in the Prose category.

The evening of remembrance Aleś Razanaŭ: an unknown quantity took place in the literary and philosophical cafe ZNO organized by the Belarusian Collegium online.

Euroradio Belarus has released a film Seven Ways, telling about the fates of Belarusians who had to leave Belarus at different times, but remained with it with heart and mind.

I Am The Revolution

The Słonim Drama Theater premiered a play Suitcase Mood by Hanna Bahačova. It is dedicated to junior and senior students and their parents.

I Am The Revolution by Jula Arciomava is a new book from the women’s publishing initiative Pflaumbaum.

Belarusians of Wroclaw opened children’s language courses in order to involve children in the Belarusian national culture, to deepen their acquaintance with the native land, Belarusian traditions and folklore.

Laureates of the Carlos Sherman Award for the best literary book translation into Belarusian (founded in 2016 by the Belarusian PEN Center, the Union of the Belarusian Writers and the  Local charitable organization Viartannie Foundation) have been announced.

An interactive center of living history — organized by the club Vargentthorn, which unites dozens of history buffs of different ages and professions — opened in Viciebsk.

An exhibition of political art by Belarusian designer Uładzimir Ceśler opened in Warsaw.

A large media project in memory of Belarusian and Ukrainian poets executed in the 1930s has been created in Ukraine.

Pomidor/OFF released a new single Farewell to the Motherland for “Night of the Executed Poets”. 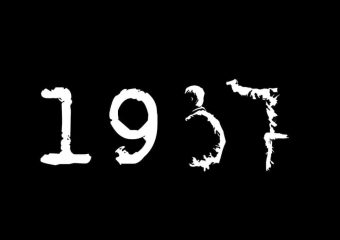 Volha Jakuboŭskaja for the Night of Executed Poets

The Night of Poets was held in dozens of cities around the world.

On the night of October 29-30, 1937, more than 130 representatives of Belarusian cultural and intellectual elite, including 22 writers, were executed in the Kurapaty woods. Every year on this day in memory of them and other victims of the Stalinist repression “The night of the executed poets would take place in Kurapaty”, but this year it was cancelled because of the risk of arrests.

Among other things, issues related to Belarusian culture were discussed at several panels at the World Belarus Congress. Natalla Lavonava, fired actress of the Hrodna Regional Drama Theater, who had to leave the country,

“I really want to go home, I cry every day. I hurt for Belarus… there are a lot of good people here, a beautiful city, but there I have my parents, friends, my homeland and home, everything. At some point I realized that it’s even harder to preserve Belarus inside oneself there than here, such a paradox. There you have to live under the occupation and follow the regime’s rules or be in prison. I see how many Belarusians stop trying to do something and just want to live happily. I don’t blame anyone. But I will be able to live and be myself only if I don’t turn this page and will constantly do something.” Anžalika Krašeŭskaja, ex-director of the Center for Visual and Performing Arts “Art Corporation” in the long-read showing the role of the Center, especially its projects International Film Festival “Listapad” and International Theatre Forum “TeArt” in the development of Belarusian culture and civil society,

“What kind of professionalism in the field of culture can we talk about? When they prioritize the quantity of events over quality, when professionalism is replaced by loyalty. For so many years we have had neither cultural policy nor strategy.” Siarhiej Budkin, initiator and manager of many cultural projects and programs in Belarus. He started the Belarus Culture Solidarity Foundation, now the Belarusian Council for Culture,

“Our media could act as a kind of collective psychotherapist. If they not simply reported, but also raised questions, to open discussions. In connection with the current repressions, it would be interesting to discuss the topic of the victim and the executioner, and how to deal with them.” 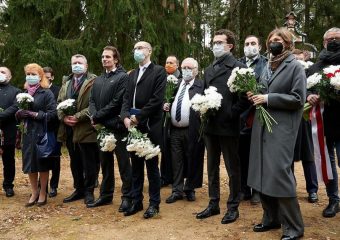 Representatives of the diplomatic missions of the European Union, Britain, Switzerland, and the United States gathered “to commemorate the numerous lives and immeasurable talent lost to the scourge of totalitarianism” in Kurapaty, a wooded area on the Belarusian capital’s outskirts that was used as an execution site by the NKVD, the Soviet secret police in the 1930s and 1940s.

The Swedish Writers’ Association hosted an educational talk on the situation in Belarus with the participation of Dźmitry Płaks, a Belarusian poet, novelist, translator and journalist, and Mikael Nydahl, translator and publisher; the conversation was moderated by Inga Lina Lindqvist, poet, writer, literary critic. 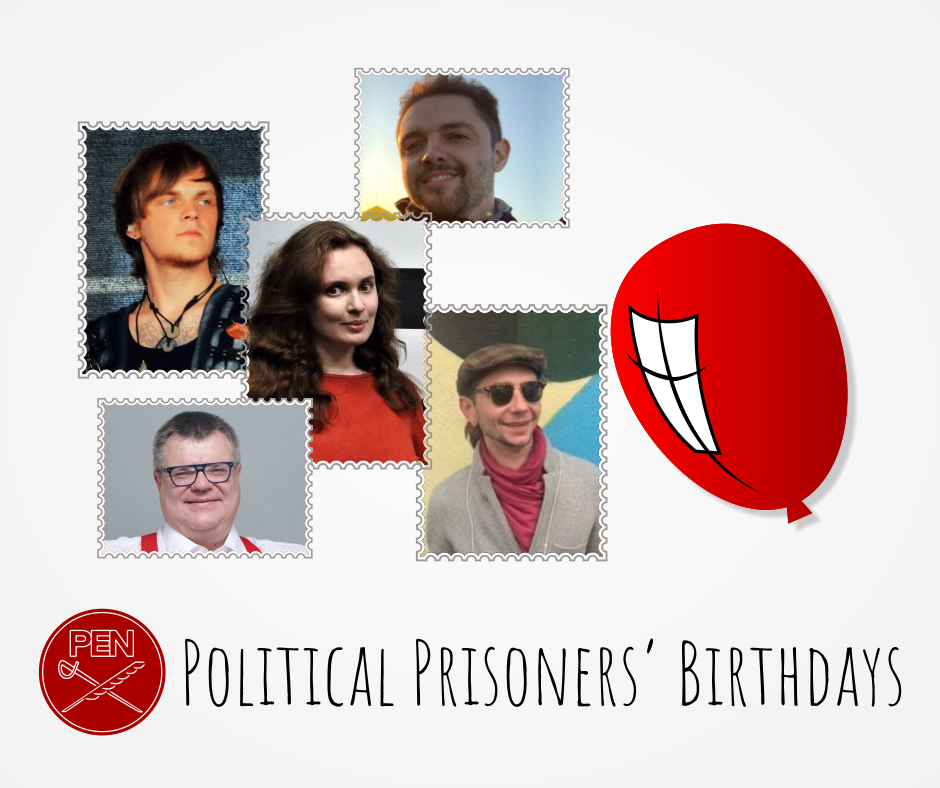 For October 26, 833 persons have been recognized as political prisoners in Belarus, and the number has been increasing steadily. This, of course, shows that repression by the authorities not just hasn’t stopped, but is actually gaining strength.

In November, 5 political prisoners somehow involved in the process of cultural development of our country, will celebrate their birthdays behind bars. They are: