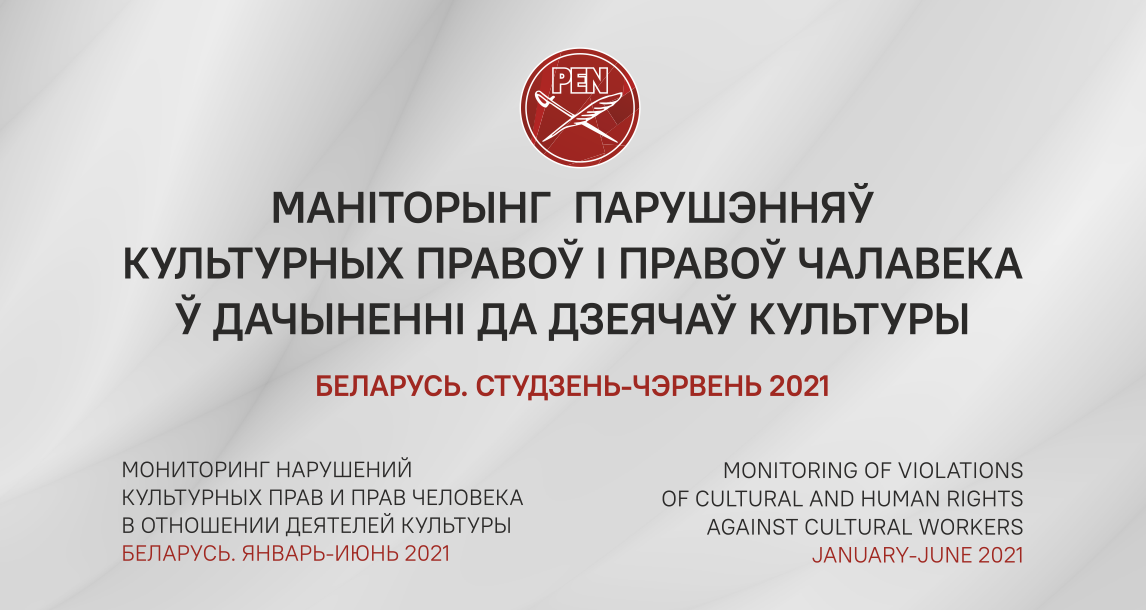 The saddest thing is that I see no end to it all. There is a total clean-up of the Belarusian world. They destroy according to a devilish plan ...

The Belarusian PEN Center systematically collects information on the implementation of cultural and human rights with regard to cultural workers. From August 2020 to the present, we have been witnesses and documentaries of the prearranged  high pressures placed on all of free society and cultural figures in particular. This is a tragic time for freedom of expression, freedom of creativity, freedom of opinion, etc. The socio-political crisis is characterized by the violation of fundamental human rights and freedoms, persecution for dissent, censorship, an atmosphere of fear, and the expulsion of proponents of change.

This document contains statistics and examples based on the collection and synthesis of information from open sources, correspondence and personal conversations with cultural figures for the period from January to June 2021.

During the first half of 2021, we noted 621 cases of human and cultural rights violations. 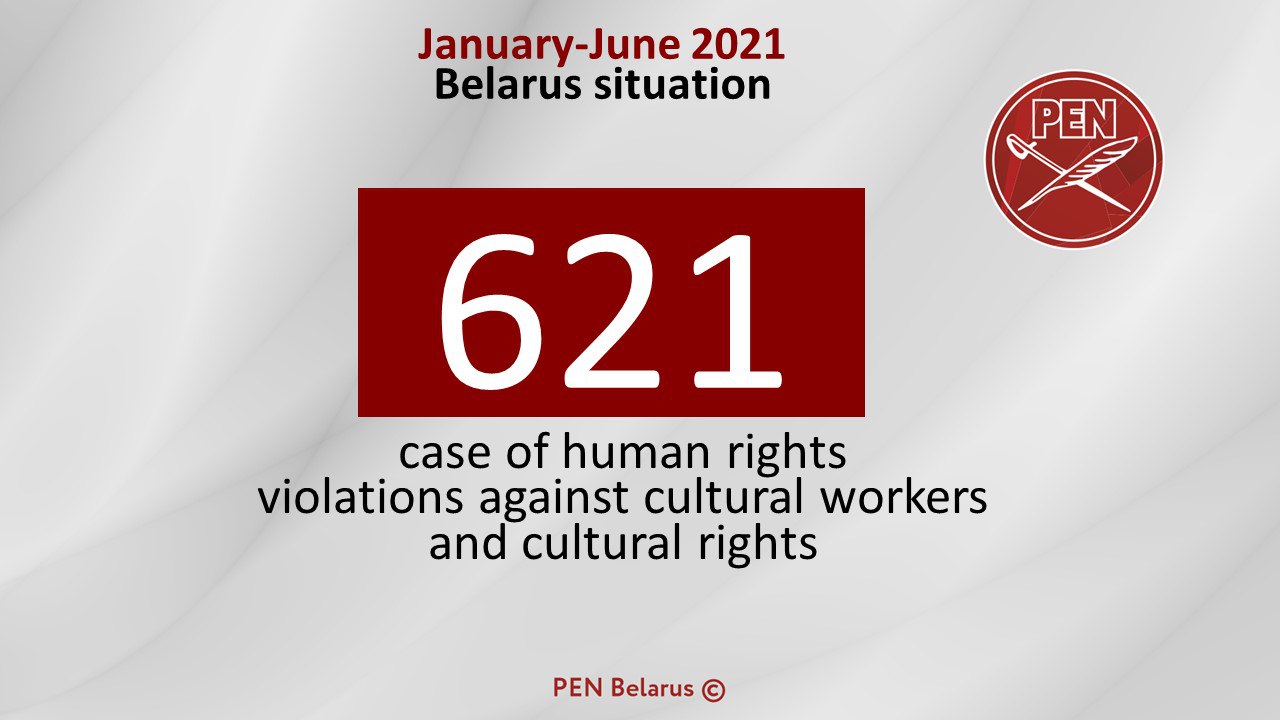 The number of violations in January-June 2021 is more than the volume of recorded cases for the entire year of 2020 (593) (We are talking specifically about the cases of 2020, which were included in the monitoring review during that year. While collecting data on cases in 2021, we also continue to record the missed cases from  2020. It means that there were more of them.). It can be argued that the pressure and repressions, which have been especially strong since August 2020, and which started during the presidential campaigns, have not weakened, instead the repressions are acquiring new forms and are affecting an ever-widening range of Belarusian cultural subjects.

The dynamics of recorded violations since 2020: 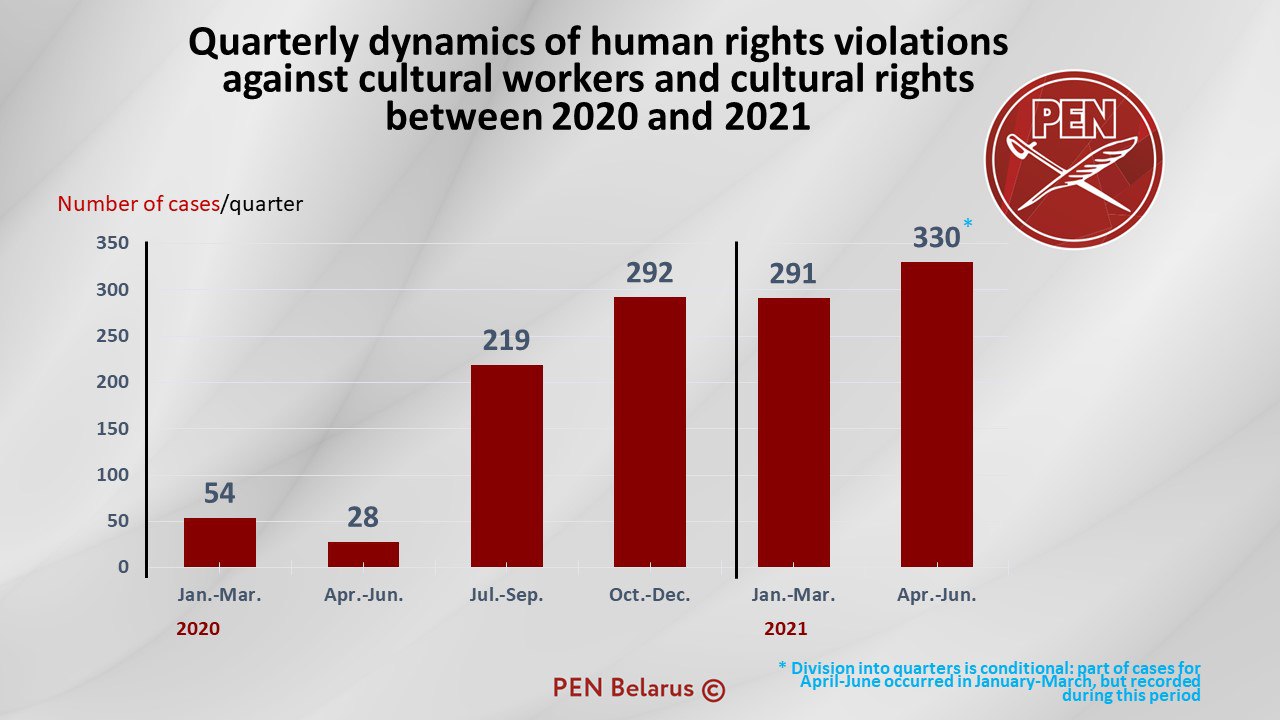 Temporarily, the cultural manager Dzianis Chykaliou has the status of a “former” political prisoner, since at the moment he is free under recognizance not to leave the country. But in pursuance of the sentence, he will be forced to go to an open-type correctional institution (for “khimiya”: sentenced to 3 years). 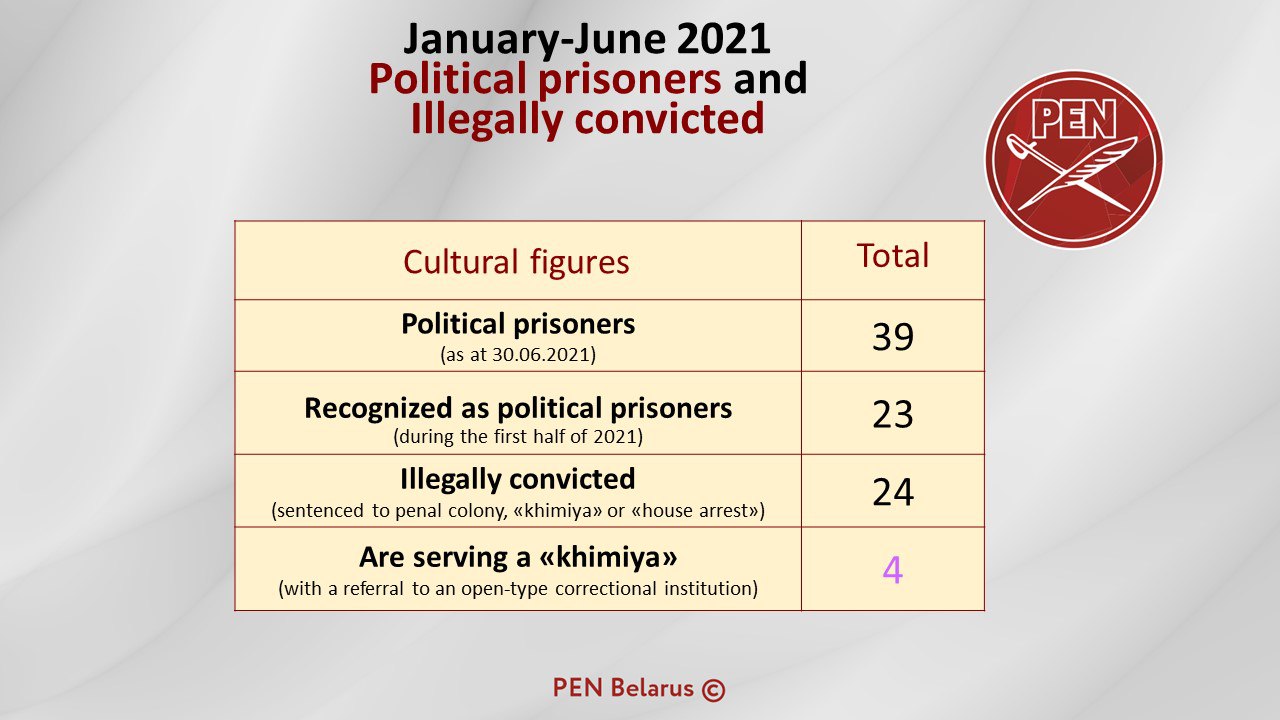 A characteristic “feature” of the second half of the year is that cultural workers who were sentenced to “khimiya” and later released home for a while after the announcement of the verdict, began to receive referrals in June to serve their sentences in open institutions. So, in June, cultural manager Liavon Khalatran, poet and director Ihnat Sidorchyk, musician Ihar Bancar and designer Maksim Taccianok were sent to “khimiya”. Court appeals of unlawful sentences did not lead to a change in the measure of restraint.

Within the scope of our research we have also focused on the detention conditions in closed institutions. In the period January-June 2021, we identified 44 situations with a description or mention of the conditions that prisoners face in detention. These descriptions are limited to information available to us through the media and through the publications of relatives. We understand that the limited sources of information, the difficult and often absent correspondence with prisoners, and the strict framework of prison censorship do not allow us to declare completeness of the information; however, even on the basis of the available facts, we argue that the conditions of detention constitute, at a minimum, cruel and degrading treatment, and in some cases show signs of torture.

Previously we mentioned arbitrary detention, criminal prosecution, illegal conviction and other situations–this is the list of the most frequently violated rights concerning cultural figures and people that  exercise their cultural rights. Dissent (views different from those broadcast by government officials) is the main reason people have been prosecuted. 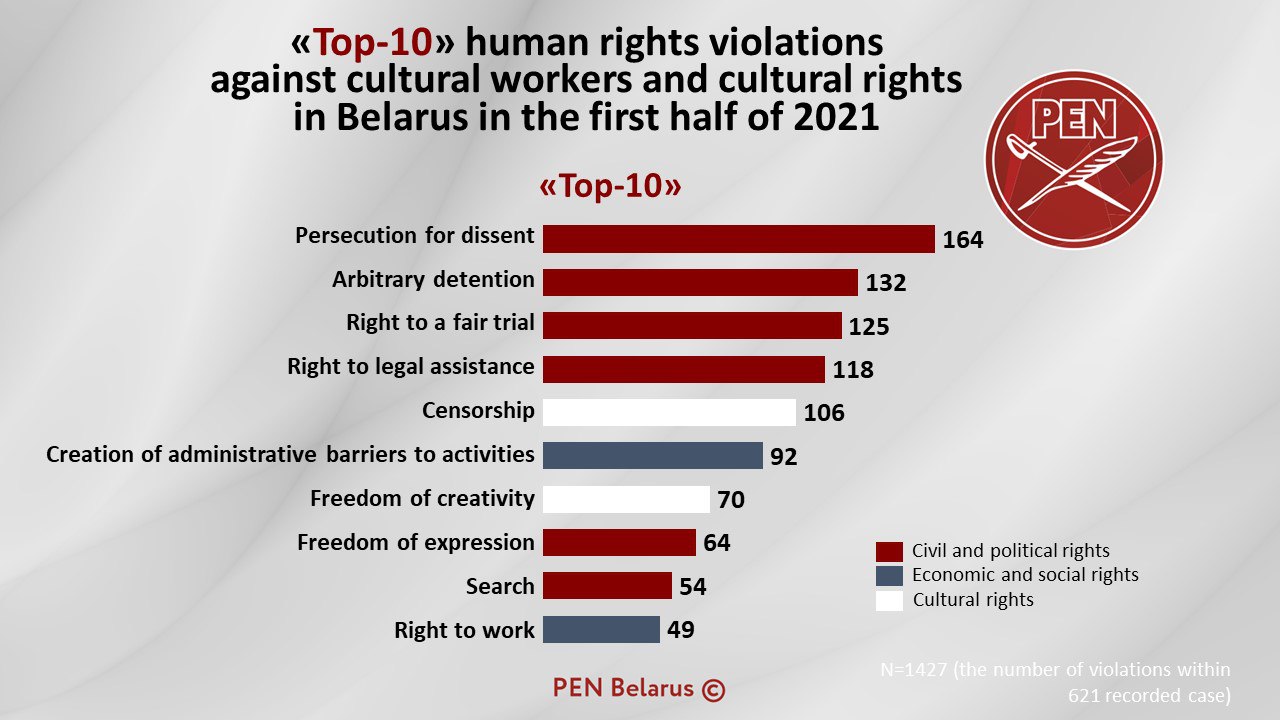 We also recorded an increase in the number of individuals leaving the country to ensure personal safety, language discrimination cases, and the right to use cultural products.

Special attention should be paid to the increase in administrative and criminal liability for the use of national symbols. This practice has developed throughout the country. Until now, the white-red-white flag and the coat of arms “Pogonya” have not been recognized as extremist, but now people are being held accountable not only for their use of the flag but also for variations in the use of the color combinations of historical symbols. The use of national symbols is not the main focus of our research, but more than 400 cases across the country were captured in our field of vision alone in six months.

WHO IS IN THE MOST VULNERABLE POSITION DURING THE CURRENT PERIOD

Starting from January of this year, non-state publishing houses, publishers, book distributors, independent press, including those with content on cultural topics, authors, and often readers themselves, have come under pressure. So,

Since the beginning of 2021, we have recorded a trend aimed at creating obstacles to the activities of independent cultural spaces. This trend not only continued throughout the past six months but also transformed into extreme forms of pressure on these organizations. The repressions began with interrogations of managers, searches, seizure of documents and property, and continued in the form of numerous reviews by the Financial Investigation Department, the Tax Inspectorate, units of the Ministry of Emergency Situations, etc. These repressions ultimately have turned into an extreme form of administrative pressure – the liquidation of organizations.

Back in 2020, “war was declared” on commercial initiatives that built a business on the national segment (national symbols, souvenirs). So, during the past six months, and especially in the first quarter of the year, all over Belarus obstacles were created for stores that sold national symbols and clothes: Kniaź Vitaŭt, Symbal.by, Roskvit, Moj modny kut, Vokladki, БЧБ.bel, Admetnasts, Cudoŭnaja krama, Chameleon, LSTR Adzieńnie, workshop Moj rodny kut, designer clothes brand Honar. The shops and/or the owners were inspected by employees of all kinds of services: the Ministry of Emergency Situations, the FDI, the Department for Combating Economic Crimes, the Department for Combating Organized Crime, the police, the OMON, the Labor Protection Inspectorate, the State Standard, etc. In June, the store Admetnasts was also visited by representatives of the ideology department of the city executive committee with claims to goods that had  red and white colors.

Some stores and organizations were forced to cease their activities in part or in whole:

A separate topic which occurs in the context of violations of the rights of cultural workers and cultural rights, but occupies a separate place in the discourse of officials, is the attitude towards contentious topics in the realm of  historical memory.

In the rhetoric  of state representatives, these attitudes have been positioned as the “prevention of the glorification of Nazism.” Thus, in the Mogilev region, for example, a working group has been created to investigate a criminal case on the genocide of the Belarusian people during the Second World War, and A. Dzermant, a researcher at the Institute of Philosophy of the National Academy of Sciences of Belarus, suggests collecting, documenting and presenting such facts to Western “partners”. In the first reading, the deputies of the Parliament adopted a bill on the prevention of  the rehabilitation of Nazism. The Ministry of Culture of the Republic of Belarus, together with the Brest regional and Berezovsky regional executive committees, held actions dedicated to the events at the site of the concentration camp in the city of Bereza-Kartuzskaya (now Bereza, Brest region), although earlier the authorities showed no interest in this place.

As for violations within the framework of this topic:

The criminal prosecution of the artist Ales Pushkin is underway, authors, books, publishing houses, exhibitions, performances, concerts, the anthem “Mahutny Boža”” and other cultural institutions and activities have been censored.

We have already cited examples of violations within each of the three groups of rights: civil and political rights (persecution for dissent, arbitrary detention, conditions of detention in closed institutions, defamatory statements, and others); cultural rights (censorship, freedom of creativity, the right to use symbols) and socio-economic rights (forced termination of activities, confiscation of property, creation of administrative obstacles to the implementation of activities and liquidation as its extreme form).

This right also belongs in the group of socio-economic rights and is included in the Top 10 most frequently violated rights during the first half of 2021.

In almost every situation of dismissal recorded in our monitoring, the violation of the right to work is associated with persecution for dissent and the violation of the right to freedom of expression. It was these two components that led to the fact that cultural figures, previously seen in active civic positions, were either fired from their jobs or conditions were created to push them to resign.

Employees were dismissed / not renewed:

DISCRIMINATION ON THE BELARUSIAN LANGUAGE

There were 33 situations of discrimination based on language. The overwhelming majority of them are about the Belarusian language (in second place is Polish). The situations concern both individuals and organizations as well as language discrimination at the national level.

Thus, we collected next cases:

In addition to cases of punishment for transporting, storing or reading books mentioned in the section “Literature”, as well as the facts of discriminatory attitude towards the Belarusian language, other cases of violation of the cultural rights of Belarusians have been recorded. In particular:

Separately,  numerous cases have been  recorded beyond the main monitoring:

It is difficult to serve art when “the country has no time for laws”, when all norms – legal and human – have been violated.