Search
ПЭН » News » Cultural rights » Come out to see the spring! – together with the Belarusian culture in all its life-affirming power. Issue 22

Come out to see the spring! – together with the Belarusian culture in all its life-affirming power. Issue 22 When the attacks fall down on us, one after another, – we say “us”, because every unjust sentence, every dismissal for one’s political stance, every closed cultural space – is personal, we might first freeze, but then quickly recover from the shock and rush to defend ourselves, our people, our culture, our country. And we will defend them at all costs. Juraś Dziešuk, a journalist from Biarozaŭka, was fined 1,450 BYN [461 EUR] for allegedly shouting “Long live Belarus” at the trial of Vitold Aškurk.  A video from the courtroom shows that Juraś was there as a journalist and took pictures of Vitold after the verdict.

Vadzim Dźmitranok, an architect who was detained on November 15 during a crackdown on the Square of Change and charged under four articles of the Criminal Code, faces up to eight years in prison.  After being detained in November, he was severely beaten, so he was taken to hospital with a mild traumatic brain injury, scratches, bruises and other injuries.

On March 1, the Viciebsk court sentenced a 23-year-old resident of Viciebsk to one year in an open correctional facility for “taking a flagpole with the state flag of Belarus from the wall bracket of a store building and throwing it to the ground.” 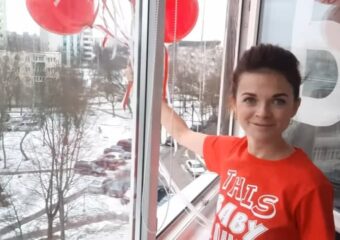 Volha Takarčuk, a YouTube blogger for 30,000 followers, was detained again on March 2 in Minsk, and released after signing a promise. On that day, several dozen administrators of regional and local activists’ Telegram chats were detained around Belarus. Volha was previously detained on January 25 for a single-person picket during which she released white-red-white balloons from the window.

Michaś Ziziuk, a poet, was detained on March 3 in Navahrudak. He was one of those who would join the guided tours which took place under police surveillance and whose participants eventually started to be detained. He was fined 30 basic units [276 EUR] for “distributing unregistered leaflets”, and released on March 4.

Ihar Bancar, leader of the band Mister X, has been trialed in Hrodna for a performance he did in October 2020. Ihar pleaded not guilty, refused a lawyer’s services and went on a dry hunger strike. The court rejected Ihar’s request for the trial to be conducted in Belarusian. 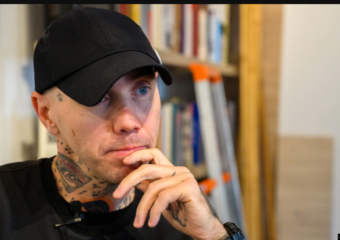 The criminal case was opened against the Human Rights Center “Viasna” under Art. 342 of the Criminal Code (organization and active participation in group actions that grossly violate public order).

On March 12, a journalist Raman Vasiukovič will be tried for importing the book “Belarusian Donbas” to Belarus.

Anastasija Pieravoščykava, a resident of Homel who designed the flag of the Navabelicki district of Homel, has been in prison since the end of January 2021. She was tried 6 times in a row, each time receiving 15 days of administrative arrest. Anastasija’s apartment and her grandfather’s house were searched, all the equipment was confiscated.

Aksana Plikus, actress of the Hrodna Drama Theater, who showed open support of her fired colleagues, and also takes part in creative events taking place on alternative venues, has her contract not extended – March 31 is her last working day.

Ihar Kaźmierčak, the owner of a store selling Belarusian National Souvenirs as well as editor of the orsha.eu media resource, on March 2 had his bank accounts blocked.

On March 2, the recording of the concert of the band “Daj Dorogu!” was disrupted. Police came to one of the Minsk clubs an hour before the start of the recording, and all those present were ordered to disperse under the threat of being detained by riot police. In Brest, the band also can’t perform: the authorities refused to issue a tour certificate to them. See the link to support the musicians with a donation. 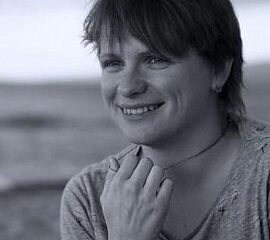 On March 3, Taciana Niadbaj, Vice President of the Belarusian PEN Center, was summoned for questioning by the Investigative Committee. Taciana is free, she signed a non-disclosure agreement.

The store selling products with national symbols Symbal.by, had to close on March 3, under a lot of pressure from the city authorities, after seven years of operation. The persecution of the store began in June 2020, when they were demanded to be closed due to alleged violations of sanitary norms, and people standing in line to buy goods and support the store were detained. 419 T-shirts with the writing “Psychosis 3%” (referring to the quote of Łukašenka that Covid-19 was only psychosis rather than real and that those who supported alternative candidates only made up for 3%) were confiscated. Despite numerous inspections, including those of the companies and entrepreneurs-partners of Symbal.by, and the fact that the customs neither shipped from Belarus nor returned to the seller more than 200 parcels with orders from foreign buyers, the online store continued to operate until January 30, 2021, when four store employees were detained right at their working place and sentenced to 15 and 20 days of administrative arrest. 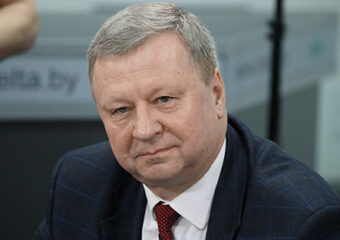 Viktar Šadurski, Dean of the Faculty of International Relations of the Belarusian State University, one of the most liberal faculties in the country, quit. Viktar himself has always stood up for students and defended their interests, including the students getting in trouble for the protest. 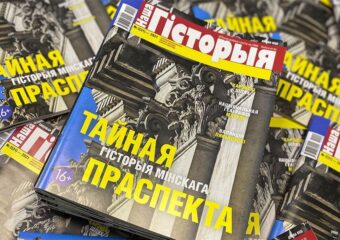 Three magazines published by Nasha Niva, one of the leading independent Belarusian media outlets, have been banned from being sold in the state-owned newsagent’s. The editors asked readers to buy the magazine in their office directly, and over two days, thanks to the solidarity of the people, more copies were sold than previously sold in a month.

The Moving Art Festival, an independent arts festival that was to open on March 6 at the MAF art space in Minsk, was postponed because the owner restricted access to the premises. It’s not the first time this space faces such issues, and it’s one of the many independent venues that have been targeted.

Hienadź Karšunoŭ, former head of the Institute of Sociology of the Belarusian Academy of Sciences and now a researcher at the Department of Social Sciences at the European Humanities University, and Alaksiej Łastoŭski, an associate professor at Polack State University, expressed their expert opinion on the “war of flags” for Deutsche Welle. Among the many cases of repression for white-red-white symbols over the week, this one stands out. Illa Kvačenka, a resident of the Pirs district of Minsk, hang a white-red-white flag on his balcony. On March 3, unknown individuals appeared near his home, and when he refused to open the door and remove the flag from the window, there came a truck which evacuated his car. On the morning of March 4, Illa was summoned to the police department, and on March 5 he was sentenced to 15 days of administrative arrest.

The head of  Barysaŭ forestry nursery warned the workers that no white tulips should be sold by them, despite the fact that there’ve grown a lot of white tulips and the financial loss would be considerable.

Former director of the Mahiloŭ Museum of History Alaksiej Baciukoŭ, whose contract was not extended in January 2021 for his support of the protests, launched a historical program on Youtube, and in the first issue he tells about the first settlers of Mahiloŭ. 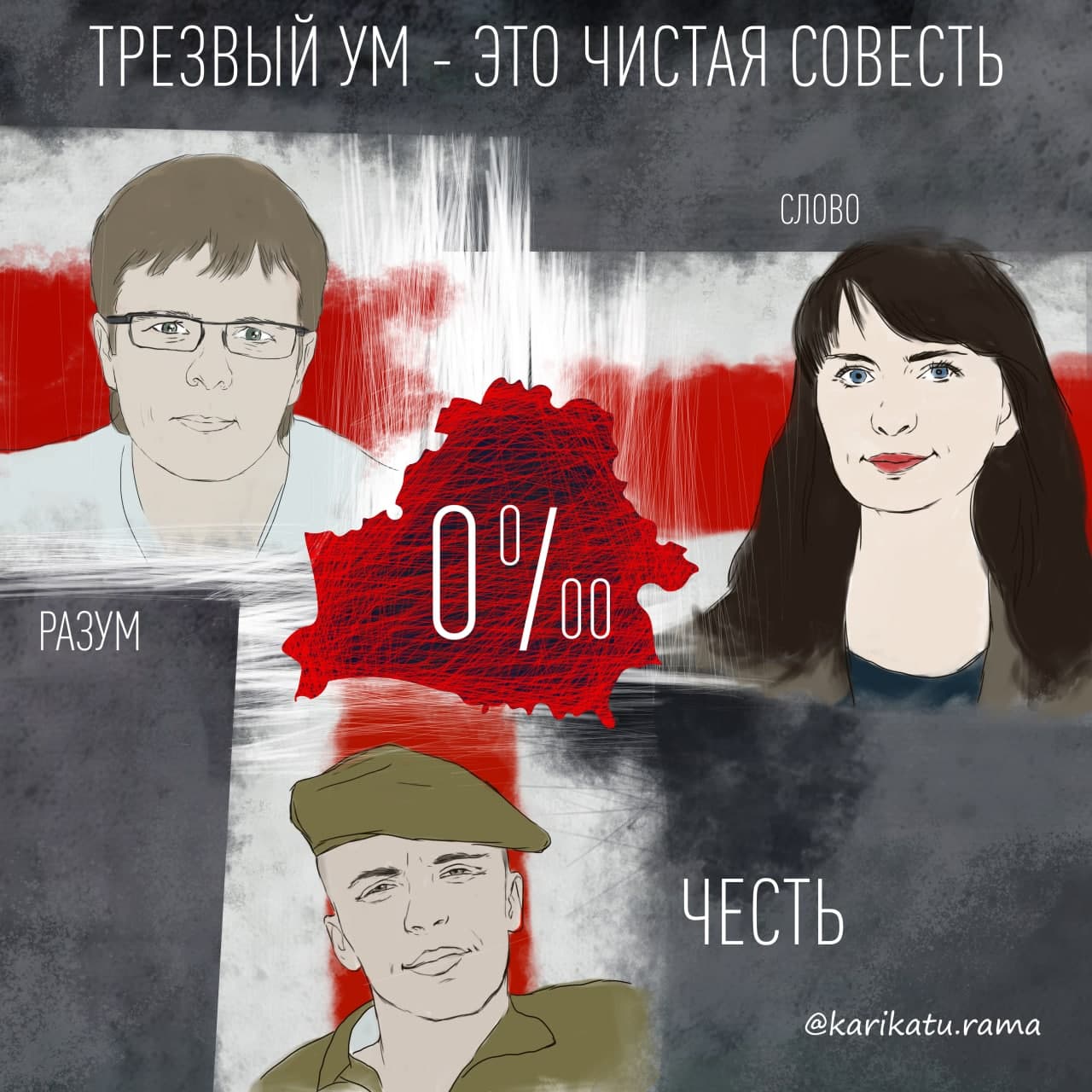 “Abstinence from alcohol as a sign of solidarity is a step that will allow us to maintain sobriety in a difficult period and remember how things really were,” – the author comments on their work.

A story about the conditions of detention in the Hrodna prison, illustrated by the prisoner-author’s drawings.

In the new issue of the project “Words are more powerful” Raman Abramčuk, musician and translator, reads an excerpt from the story “All-Belarusian Congress of 1917” by Maksim Harecki.

On March 4, a large online concert of classical music KEDUK / RADUNSKI took place with the participation of Illa Silčukoŭ, a star vocalist who was fired from the Bolshoi Opera and Ballet Theater along with a number of other leading artists, and who had to emigrate to the United States. Anastasija Bułybenka, student activist, a political prisoner detained on November 12,  sends drawings to her mother from the pre-trial detention center and writes:

“I’m not afraid a tiny bit, trust me. I’m ready for absolutely any development of the case.”

Belarusian medical workers have created an initiative to expand the use of the Belarusian language in medicine.

“We want to reach the hearts of people through art”, Belarusians held a “Live Exhibition” in Vilnius with reproductions of famous works of Belarusian protest art. “Now if you don’t support what is done [by the authorities], you are unwanted. It’s ok, all good: we’ll take a break. We can play online concerts, and we’ll find how to earn for basic things. Now, of course, the Covid is also an issue, but in general, we are welcomed in Ukraine and Russia”. 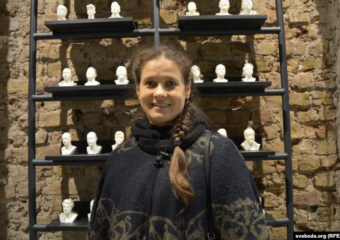 Taciana Hrynievič-Matafonava, whose violin became one of the symbols of last year’s protests, was forced to flee the persecution and found shelter in Istanbul, but she continues doing something for Belarus there:

“To jam us, loud music of the Soviet years was played from the speakers above Independence Square [in August 2020], but what we did we danced to it – waltz, foxtrot. We found a way. It was nice, emotional, although scary, because there were riot police around here and there. Sometimes there was such a feeling of despair that they would disperse or arrest us, but the violin played, everyone picked up Kupalinka, and the despair receded”. 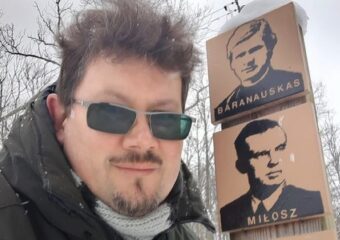 “Everything will be alright. We should keep on the road and our destination may be much closer than it seems today”.

“I always wondered how in 1942-1943, when the destruction of the Minsk ghetto around the Niamiha began, the whole city continued living its usual life. People went to the Philharmonic which had just opened, to the movies… And rivers of blood flowed nearby. People couldn’t but know what was going on there. The whole city was soaked in blood. Now I walk past the prison in Valadarskaha street, knowing that my close friend is there, but I come home, cook dinner, drink coffee and can even smile… So much suffering around, but we keep on living. Of course, it’s not a harmonious life, not a happy life… But we live, although it’s hard to breathe”.

Our Ukrainian colleagues, with the support of the Ukrainian PEN Club, conducted a detailed review and analysis of the repression against Belarusian writers, bloggers, and journalists as part of their EmptyChairPeople project.

Belarusians of Wroclaw held a theatrical action against Belteleradiocomoany’s participation in Eurovision. 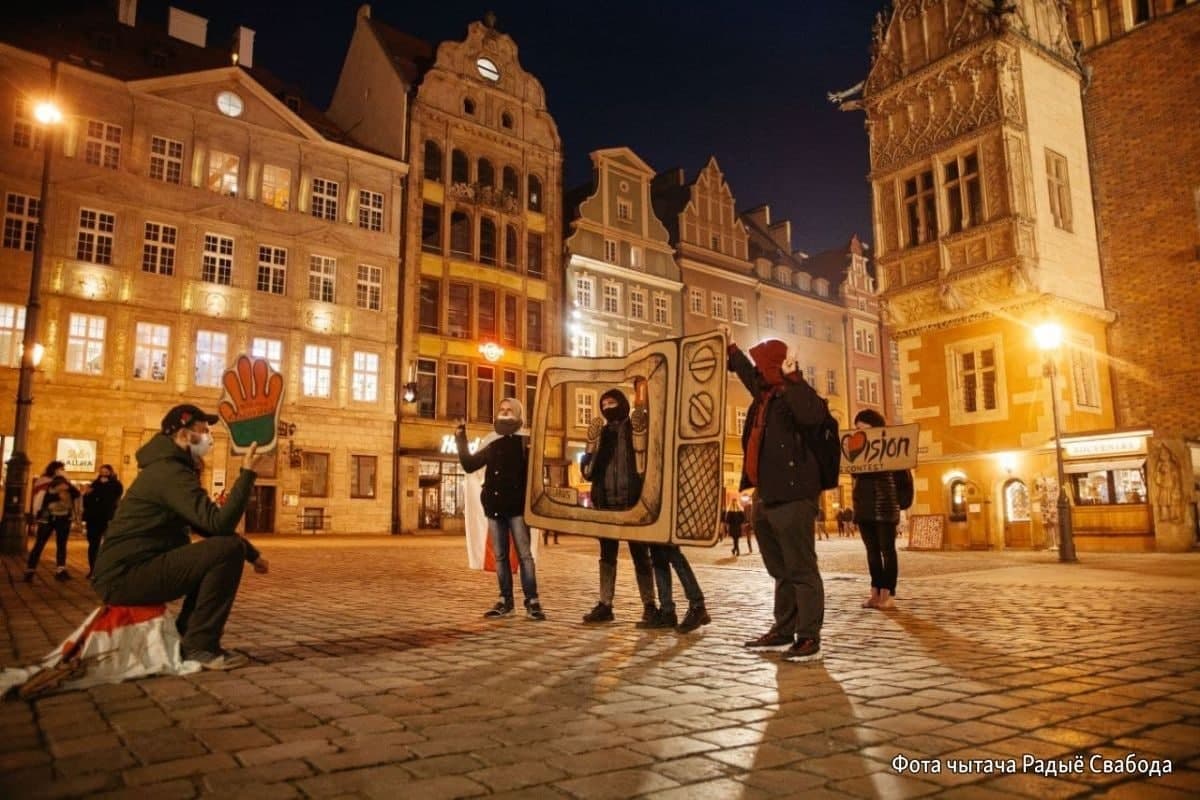 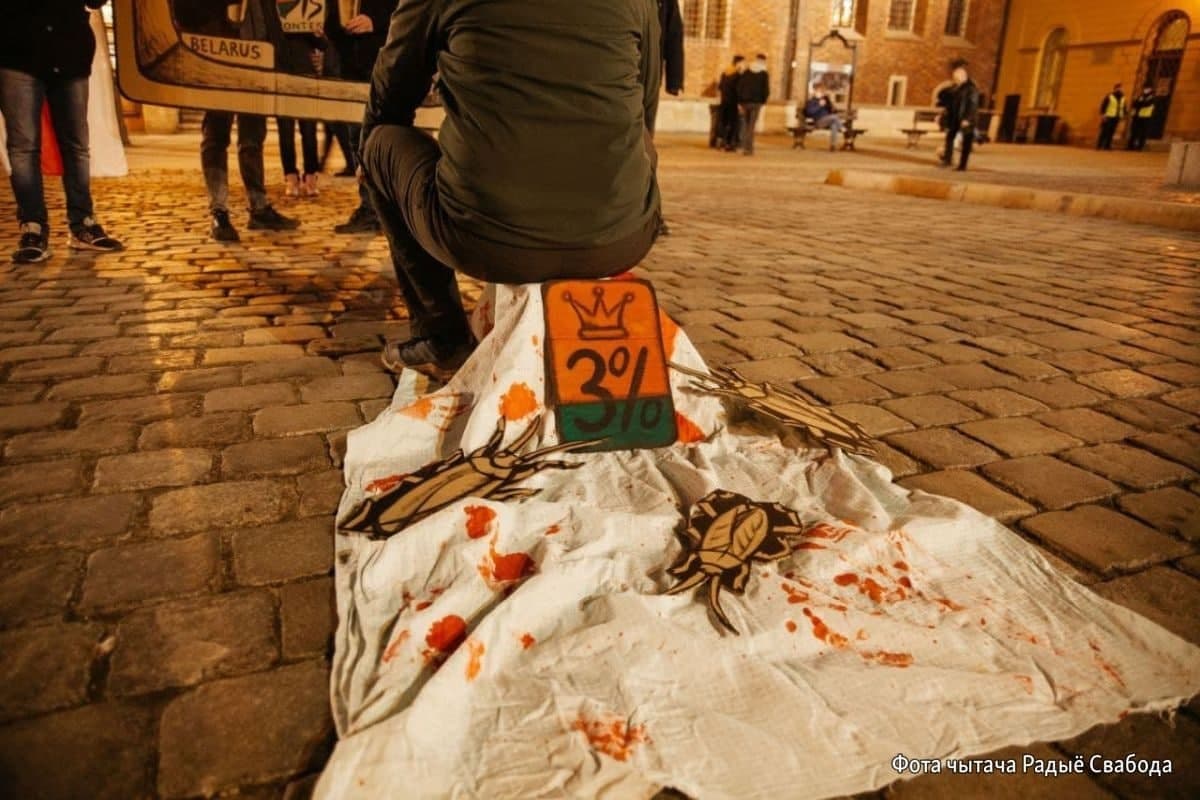 An exhibition named A Secret Museum of Workers Movement opened in Vienna last week in solidarity with the workers who’ve gone on strike in Belarus.

Maryja Kalesnikava has become one of the laureates of the International Women of Courage (IWOC) Awards.

A photo exhibition “Belarus: the March of Freedom” has started at the Kardegard Gallery in Warsaw.

Download the pdf-version of issue 22 of Cultural Resistance Monitoring