Chronicle of violations of human rights in the cultural sphere (January 1-15, 2023) 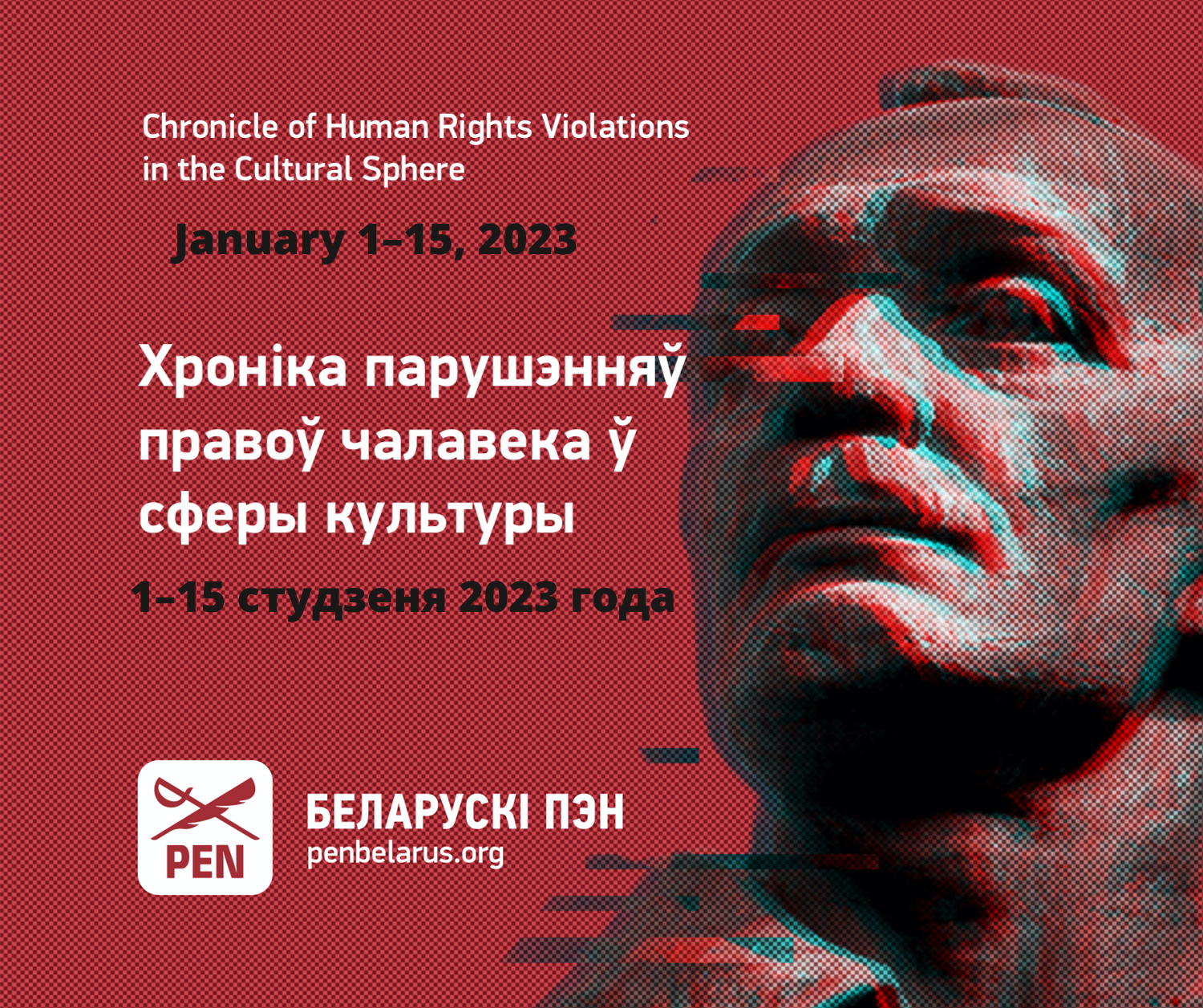 Chronicle of violations of human rights in the cultural sphere (January 1-15, 2023)

The authorities announced the sentence in the criminal case of Vatslau Areshak, cultural scientist, the editor of the bulletin of radio electronic industry workers. He was sentenced to 8 years in a maximum security colony.

Charges have been filed against Pavel Belavus, creator of Symbal.by store and cultural manager.

Bard and poet from Homiel Aliaksei Ilyinchyk (“Leshyi”) is held in pre-trial detention center No. 3 in Homiel.

Cultural scientist, etiquette and business communications coach Aksana Zaretskaya is being held in pre-trial detention center No. 1 on Valadarski Street in Minsk.

12 books on historical topics have been recognized as “extremist”.

“Yanushkevich” publishing house has been deprived of a publishing license in Belarus.

1. On January 5, a trial in the criminal case of the human rights center “Viasna” began in the Leninsky District Court of Minsk. Among the defendants there is Ales Bialiatski, a Nobel Peace Prize laureate, the chairman of the Human Rights Center “Viasna”, literary critic and a member of the Belarusian PEN. Besides Ales Bialiatski, they tried his deputy Valiantsin Stefanovich and a coordinator of the “Human rights defenders for free elections” campaign Uladzimir Labkovich. Zmitser Salauyou, who is being tried in absentia, is outside the country. Ales Bialiatski and his colleagues were arrested On July 14, 2021, since that time they have been held in pre-trial detention center No. 1 on Valadarski Street in Minsk. Human rights defenders are tried according to Part 4 of Art. 228 (“smuggling by an organized group”) and Part 2 of Art. 342 of the Criminal Code (“financing of group actions that grossly violate public order”). The trial is open. The defendants are kept in handcuffs and are in a barred cage. At the court, Ales Bialiatski stated his requests – to conduct the trial in the Belarusian language and to remove the handcuffs. The judge did not grant the petition. Ales Bialiatski stated that he did not have time to familiarize himself with more than 70 volumes of the criminal case materials, and asked to be given time to familiarize himself with the case materials. The court stated that he had enough time (a month) to familiarize himself with the case materials, and there is no reason to grant him additional time to familiarize himself with it. Ales Bialiatski demanded a writing instrument, as he only had pen rods, which cannot be used to take notes during the trial. During the trial, obstacles were created for observers. On January 5, at the “Viasna case” trial authorities detained a Russian human rights defender Katsiaryna Yanshyna who cooperates with “Memorial”. For taking photos and broadcasting from the courtroom, she was sentenced to 15 days of administrative arrest under the article on petty hooliganism (19.1. Administrative Code of the Republic of Belarus). Representatives of the diplomatic corps were not allowed to attend the trial in the “Viasna case”.

2. On January 5, the Minsk City Court handed down a verdict in a closed session in the criminal case of Vatslau Areshak, cultural scientist, editor of the bulletin of radio electronic industry workers. Sentence: 8 years of maximum security prison. Vatslau Areshak was mainly engaged in cultural projects and initiatives, was published in the magazines “Spadchyna”, Arche, pARTisan, for some time he edited an electronic site-archive “Vytoki”. He actively participated in the initiative “Experts in the Protection of Kurapaty”, initiated the creation of the “Book of Honor of Kurapaty” in memory of the victims of repressions. Vatslau Areshak was detained in April 2022.

3.  On January 6, the Supreme Court considered the complaint of the convicts in the “BelaPAN case” – the editor-in-chief of the agency Iryna Leushyna, Dzmitry Navazhylau, former deputy director, poet and lyricist Andrei Aliaksandrau and his wife Iryna Zlobina. The sentences carried out on October 6, 2022 have been upheld: 4 years of deprivation of liberty in a general regime prison for the director – editor-in-chief of BelaPAN Iryna Leushyna, 6 years in a maximum security colony for her predecessor in the position of director Dzmitry Navazhylau, 14 years in a maximum security colony for the former deputy director Andrei Aliaksandrau, 9 years in a general regime colony for his wife Iryna Zlobina. In addition, Dzmitry Navazhylau was fined 700 basic units (now it is 22,400 rubles), Iryna Zlobina — 800 basic units (25,600 rubles), Andrei Aliaksandrau — 1,000 basic units (32,000 rubles).

4. On January 9 charges were filed against Pavel Belavus, creator of Symbal.by store and cultural manager, detained on November 15, 2021. The Investigative Committee stated, “Under the guise of cultural and historical development, he spread the ideas of Belarusian nationalism, the goal of which was to change the state power in Belarus, in various public social networks and websites.” Allegedly, Pavel “stimulated the enmity of his compatriots towards the Motherland. With his criminal actions, Belavus endangered the external and internal security of the state for ten years.” According to the results of the investigation, Pavel was charged under Part 1, Art. 356 (treason to the state), Part 1, Art. 342 (organization and preparation of actions that grossly violate public order), Part 3 of Art. 361 (calls for actions aimed at harming the national security of the Republic of Belarus), Part 1, Art.361-1 (leadership of extremist formation). The investigation of the criminal case of Pavel Belavus has been completed, the materials have been handed over to the prosecutor for referral to the court.

5. On January 12, it became known that Aliaksei Ilyinchyk, bard and poet from Homiel (“Leshyi”), was detained in August 2022 and has been in pre-trial detention center No. 3 in Homiel since then. According to the pro-government Telegram channel, the bard was detained for “creative” activity on the Internet. Alleged articles, under which Aliaksei Ilyinchyk is suspected – Art. 130 of the Criminal Code (inciting enmity), Art. 363 (resisting arrest), 369 (insulting a representative of authorities). Aliaksei Ilyinchyk is the author of books “From Lioshka to Leshyi”, (2000), “Happy Man” (2002), “Lioshiki forever! Part 1” (2002), “You know… (2004).

6. On January 13, it became known that since the end of December 2022, a cultural expert, an etiquette and business communications coach Aksana Zaretskaya has been held in pre-trial detention center No. 1 on Valadarski Street in Minsk.

1. On January 4, Andrei Tryzubau, an actor of the “Pugovitsy” theater and music band, was detained in Minsk. He was arrested for 10 days and placed in the pre-trial center on Akrestsina street.

2. On January 12, in Mahiliou, at the Department of Food and Chemical Technologies of the Belarusian State University police detained Yury Bubnou, professor and doctor of sociological sciences. Yury Bubnou is the head of the Department of Humanities, Doctor of Sociological Sciences, known as an expert sociologist, one of the creators of the Center for Urban Initiatives and the “Dranik-fest” festival.

1. On January 13, it became known that in Hrodna prison, the defendants convicted in the “Autukhovich case” are threatened with solitary confinement, forced to undress in a cold room, pushed and beaten, according to “Viasna”. For more than a week, it is not known where Uladzimir Hundar is. Hundar is a local historian from Baranavichy and he has a disability (no leg). His daughter, Inha Stromskaya, said: “He was forcibly removed from listening to the audio materials of the hearing, where all the accused are now being taken to (perhaps in a new case for “insulting” the prosecutor). At that moment, dad managed to shout that he was being beaten there. After that, music was turned on in the corridors, and nothing more is known about him.”

2. On January 13, it became known that close friends of philosopher-methodologist Uladzimir Matskevich have not heard from him for more than two weeks. “To date, we do not know anything about his whereabouts or his state of health. As a result of the organized information blockade, relatives cannot send the necessary medicines,” says a Facebook message of the “Philosopher in Prison” community dedicated to Uladzimir Matskevich.

IV. Dismissals from state institutions of culture for civil position

1. On January 2, it became known that Ihar Audzieieu, a film critic and author of the scientific concept of the History of Belarusian Cinematography Museum, was dismissed from the position of the head of this Museum.

2. On January 3, it became known that Aleh Liasun, conductor of the Theater of Opera and Ballet of Belarus, was fired at the end of December 2022. Aleh Liasun has been working in the theater since 1999, his repertoire includes 23 operas and 13 ballets.

V. Repression in the book sphere

1. On January 4, the “Yanushkevich” publishing house was deprived of its publishing license in Belarus by the Economic Court of Minsk. It is reported on the publishing house’s Facebook page: “Judicially. The trial was held on January 4 at the request of the Ministry of Information of the Republic of Belarus. Most likely, Art. 33 of the Law on Publishing was applied… If we are not mistaken, this has happened for the first time in recent history.”

2. On January 9, the Central District Court of Minsk recognized 12 books as “extremist materials”: “Belarus is above all!: (About the national Belarusian idea)”, Anatol Taras; “Year 1942 is academic”, Uladzimir Beshanau; “Forgotten Belarus”, Vadzim Dzieruzhynski; “Records of the association of lovers of Belarusian history named after Vatslau Lastouski. Challenges of the “Russian world” and Belarus. Edition 6″, Anatol Taras; “Big blood: How the USSR won the war of 1941-1945”, Siarhei Zakharevich; “National and cultural life in Belarus during the war (1941-1944)”, Leanid Lych; “Post-Soviet transit: between democracy and dictatorship: Collection of articles”, Anatol Taras; “Problems of humanitarian security in Belarus: Materials of the scientific and practical conference”; “Shadow of Victory”, Viktor Suvorov; “Pages of the past: articles on the history of Belarus”, Anatol Taras; “Transformation of the mentality of Belarusians in the 19th century. – Materials of scientific and practical conference”; “Who, how and why killed Wilhelm Kube”, Aleh Usachou.