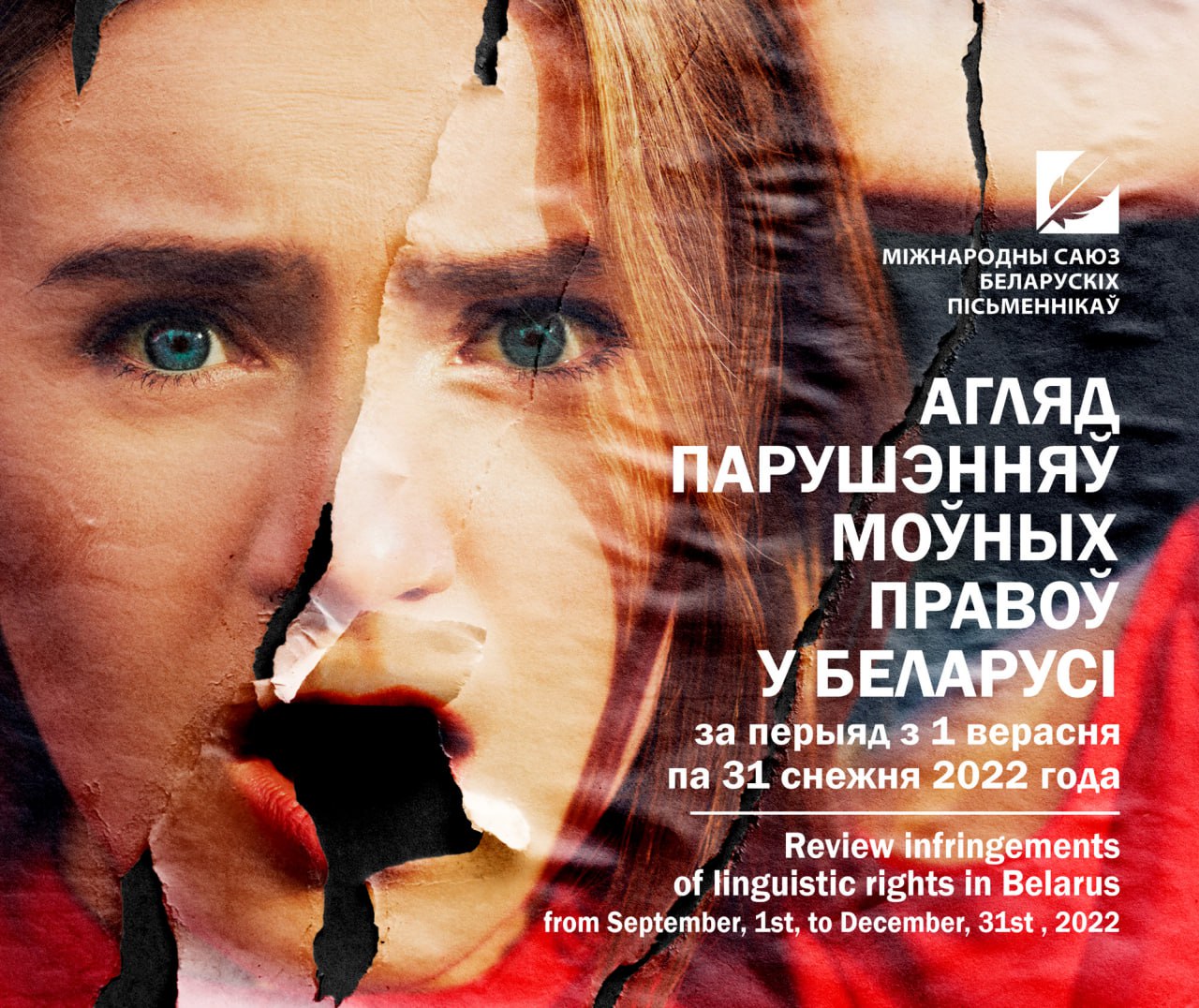 The review is prepared by the association "International Union of Belarusian Writers".

On November 5th, 2022, the Ideas Bank published a study, in which it analyzed the language policy in Belarus, the state of the Belarusian language, its trends and prospects. Here are some conclusions drawn by the authors of the study:

On September 30th, 2022, the court of the October District of Minsk recognized the contents of several international parcels as “extremist materials”. The list includes about 70 items, including: postcards, T-shirts, patches, magazines, stickers, mugs, and other souvenirs. Among other things recognized as “extremist”: the “Do not be silent in Belarusian” calendar for 2021, postcards with the text “I feel my fingers are already blue” and “Life is paradise in the country where there is freedom”, the sticker “We believe! We can! We will win!”, the magnet with an “avtozak” [“Sweat Box”; prisoner transport vehicle] and the text “Welcome to Belarus”, the sweatshirt with a cat in a crown with a sword and a shield with a cross and the inscription “Cats For Belarus”, the magazine with comics “Kazki-Kraski”. It is known that after that many international parcels and envelopes began to pass customs control.

On October 5th, 2022, at the National Scientific and Practical Center of Oncology and Medical Radiology named after M. M. Aleksandrov, Judzin Anton Alaksandravič successfully defended his dissertation in Belarusian for the degree of a candidate of medical sciences – “Treatment of patients with cancer of the lower ampulla of the rectum with the use of neoadjuvant chemoradiotherapy”. One of the distinctive features of this event is that the work is in Belarusian. It is important to say that the meeting of the academic council for this defense (the chairperson conducting the meeting, the speech of the academic secretary of the council, the scientific supervisor, opponents) was held in Belarusian. This piece of news is included in our Survey because the preparation of Belarusian-language dissertation researches in medicine is rather an exception to the rule than the rule, because basically all work is done in Russian. As noted by the Institute of Linguistics: “the successful use of the national language in the mentioned scientific works is a clear confirmation that the Belarusian language is a contemporary language that can be used in all spheres of public life.”

On November 6th, 2022, Zerkalo.io was anonymously notified of an incident at the post office. When a citizen wanted to send a telegram with a text in Belarusian, the employee immediately understood that the recipient of this telegram was in a pre-trial detention center, and that was true. This case shows us that currently the Belarusian language in Belarus is associated with prison and imprisonment.

On November 15th, 2022, the “Cyber Emo Punk” Twitter account reported that while looking for a temporary job at Chef-Kebab (7 Soviet Street, Hrodna), a guy was rejected on the grounds of his language. They said that he must be able to speak Russian, communicate in Russian at the workplace, despite the fact that the nature of the work did not require employees to have any special knowledge or skills in languages.

On December 1st, 2022, it became known that the administration of the pre-trial detention center “strongly advises” the political prisoner Anatol Ḷatuška not to write letters in Belarusian. It is reported that he is asked not to do this because the censor in the Viciebsk pre-trial detention center, where he is now, “did not study the language and does not understand it at all.” It also explains the fact why letters in Belarusian are not given to the political prisoner. The political prisoner was detained at the end of January 2022. He was sentenced to six years in prison. Anatol was found guilty according to four articles of the Criminal Code: art. 342 (organization and preparation of actions that grossly violate public order, or active participation in them), art. 370 (mockery of state symbols), part 2 of art. 339 (hooliganism, committed by several persons), Art. 203-1 (unlawful actions in relation to information about private life and personal data). On February 3rd, 2022, Anatol was recognized as a political prisoner.

On December 8th, the head of Lukashenko’s Administration, Igor Sirgayenko, said that the authorities would consider the topic of transliteration of the geographical names of streets and settlements with the use of the Russian language. The pretext is the appeals of pro-state activists who do not understand the names written in Belarusian Latin alphabet (Ḷacinka).

Until now, Belarusian names of geographical objects were transliterated with Latin letters in accordance with the Instruction on transliteration of geographical names of the Republic of Belarus with letters of the Latin alphabet, which was approved by the resolution of the State Committee on Land Resources, Geodesy, and Cartography back in 2000 as a legal act. It was accepted as mandatory at the state level.

At the same time, in response to the appeal of the human rights activist Ihar Sḷučak, the State Committee on Property reported that the transliteration of geographical names from the Belarusian language to Latin happens only when cartographic and other works intended for international use are created in Belarus in foreign languages.

On December 9th, 2022, it became known from an article in “Naša Niva” that teenagers are discussing the use of the Belarusian language at school on the Internet. Thus, a teenage girl from a district center town shares a fragment of a conversation with a school teacher. She tells the teacher that the latter cannot forbid her to answer in Belarusian because the country has two official languages. And in response she hears: “We have Russian-language education, so I will no longer give marks for Belarusian answers, only for Russian ones.” In response to this, other teenagers also report that their teachers do not allow them to answer in Belarusian, to keep a diary, notebooks, and notes in Belarusian.

On December 27th, 2022, Alexander Lukashenko and Vladimir Putin, during a meeting at the “working tea party” in the Russian Museum in St. Petersburg, agreed that the year 2023 will be celebrated throughout the CIS as the year of the Russian language.

We remind you that if you have examples of discrimination on the basis of language, which are not included in this Survey, you can send them to us at any time to our address – [email protected]

The review is prepared by the association “International Union of Belarusian Writers”.