“It’s Not What I Imagined.” Review of Belarusian Culture In Sociopolitical Crisis: August 23-29, 2021 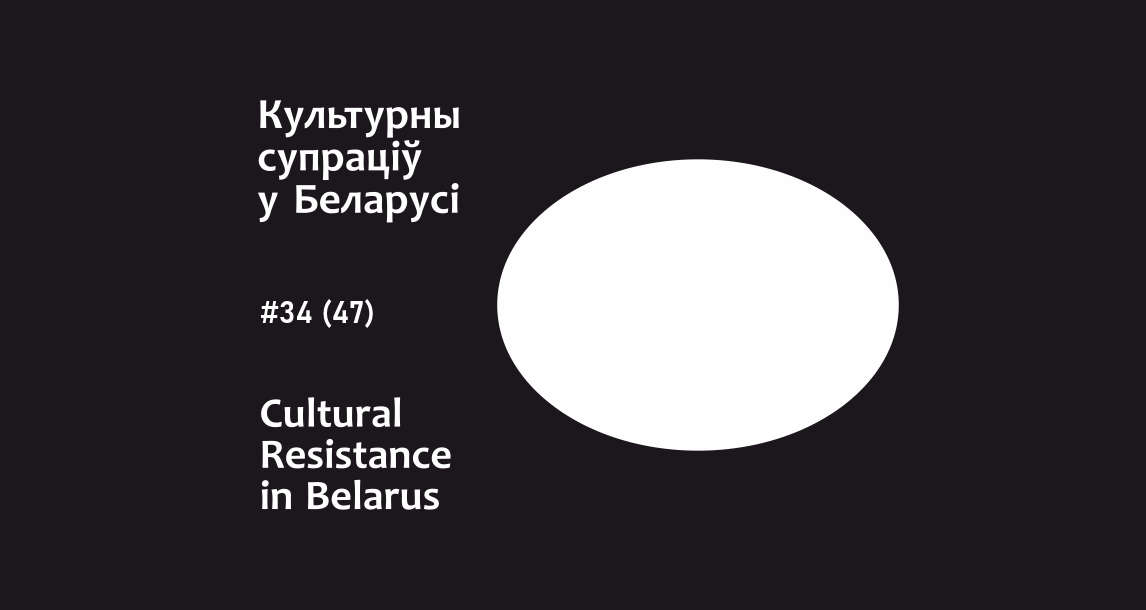 Photo: based on the cover of Aleś Razanaŭ's Book of Revival
"When all the keys are lost, there is no chance, no chance at all –  keep going love and shout encroach on victory".   Aleś Razanaŭ

Download the pdf-version of issue 47 of Cultural Resistance Monitoring 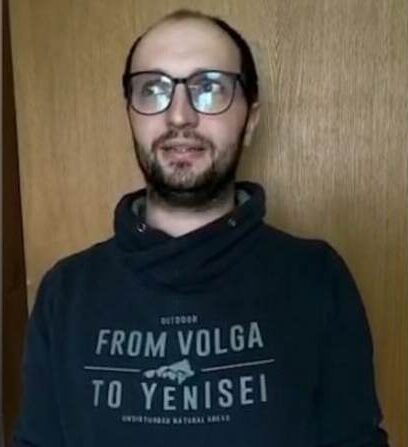 Dźmitry Kuks, a former artist of the Charoški ensemble, was due to be released after a 15-day arrest for “disobeying police officers”, on August 21, but immediately after his release, security forces put him in a dark blue minibus and drove him away. On August 23, he was sentenced to another 12 days in jail under Art. 19.1 of the Administrative Code (petty hooliganism).

Dzianis Ilinčyk was sentenced to 14 days of administrative arrest for a sticker with Pahonia on his car.

Siarhiej Bałachonaŭ from Homel was sentenced to a year in colony for the song “Łukašenka Go Away!” which he saved on his personal page in Vkontakte social network; that fell under the Article of the Criminal Code for “insulting the president”. 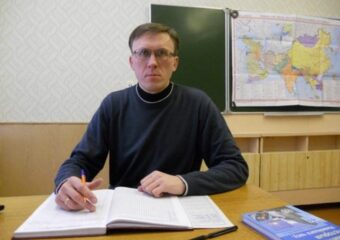 Andrej Piatroŭski, a former teacher from Smarhoń, was sentenced to 1.5 years in prison for having shown at his lesson last March a video about the Constitution with a logo of the media recognized as extremist in Belarus.

Taras Tarnalicki, a film critic, was summoned to the Main Directorate for Combating Organized Crime and Corruption as a witness on August 25. Details of the case haven’t been reported. He was released on a non-disclosure agreement. 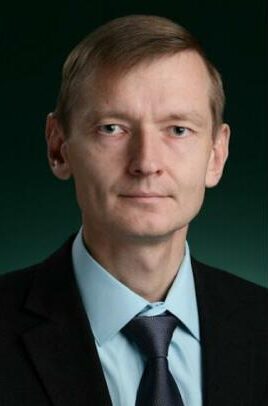 Alaksandr Dubroŭski – Candidate of Philological Sciences, Associate Professor, Poet and Literary Critic, “by agreement of the parties” quit the Faculty of Journalism of Belarusian State University. The reason for his dismissal was his signature under the collective petition against violence and lawlessness.

Ihar Karpenka, the Minister of Education, claimed that “semi-legal private kindergartens and schools under the guise of individual entrepreneurs, public or religious associations, have been in most cases used for political purposes, becoming hubs for preparing coloured revolution.“ 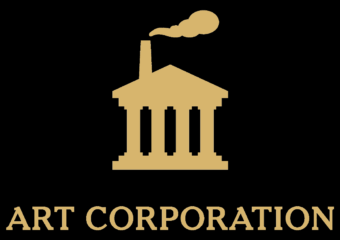 Authorities are liquidating the Homel-based non-governmental organization Talaka, which has been reviving ancient Belarusian folk rites, collecting folklore, and reconstructing authentic festivals since the 1980s.

The Minsk City Executive Committee is liquidating the Center for Visual and Performative Arts “ART Corporation”. The organization held the annual international theater festival TrArt and film festival “Listapad”, as well as organized the project TheatreHD, thanks to which Belarusians could watch screenings of the best foreign performances. 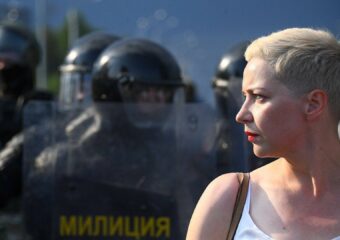 On her way to court in a police van Maria Kalesnikava tells the guards about world-famous composers. Also while transported from the pre-trial detention center to the court Maria can see the sky and the roofs of houses, but in the courtroom nothing can be seen out of the window through the curtains. Maria denies all allegations in court.

Ihar Bancer has been punished by another 10 days in the punitive confinement. So far, that makes 30 days in total. 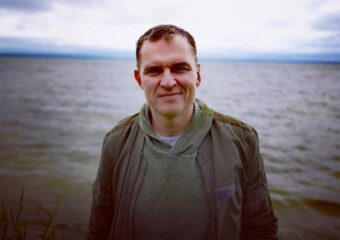 Andrej Pačobut, a journalist and member of the Union of Poles in Belarus, had his term in custody extended until November 26, it’s been the sixth month since his detention. He refused to leave Belarus. Andrej is accused of inciting national hatred (part 3 of Article 130 of the Criminal Code) and faces from 5 to 12 years in prison.

Ksenija Luckina, a former Belteleradiocompany journalist who made documentaries and historical reportages, has a growing brain tumor. Ksenija has been in prison for eight months. At first, she was linked to the “Press Club case” and accused of large-scale tax evasion. But after the case was closed, a new one was filed against her. 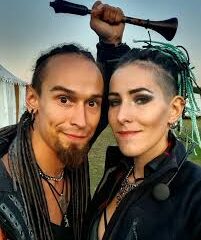 Alaksandr Vasilevič’s being in custody has been extended again. He has been kept in jail for nearly one year.

Relatives of Uładzimir and Nadzieja Kałač, imprisoned musicians from the band Irdorath, received their first letters from prison.

Uładzimir is worried about his friends who got into this situation quite by accident. He writes that at first he found it hard to accept what happened, but gradually it’s become easier. He learns to rejoice in every little thing, even the grass breaking through the bricks, the sky in the window, a short walk.

From Nadzieja‘s letter it’s clear that she is trying to keep up. With her husband, they catch each other’s eyes through the slot in the cell door when they are led down the corridor. 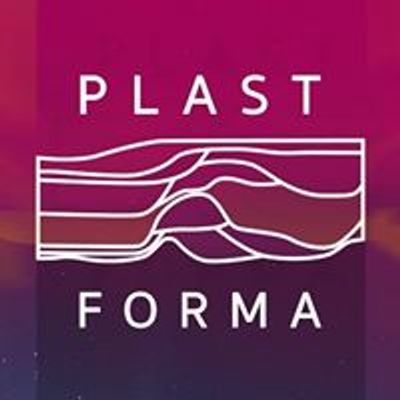 PLASTFORMA – an international festival of physical and dance theatres – is taking place in Minsk on August 23-September 1. It’s been organized yearly since 2013, and this year has its last season.

A campaign has been launched to create a digital archive of the legendary Belarusian rock band Novae Neba and a film about Belarusian rock music. The band is considered to be one of the main phenomena on the music scene of Belarus in the 90s. 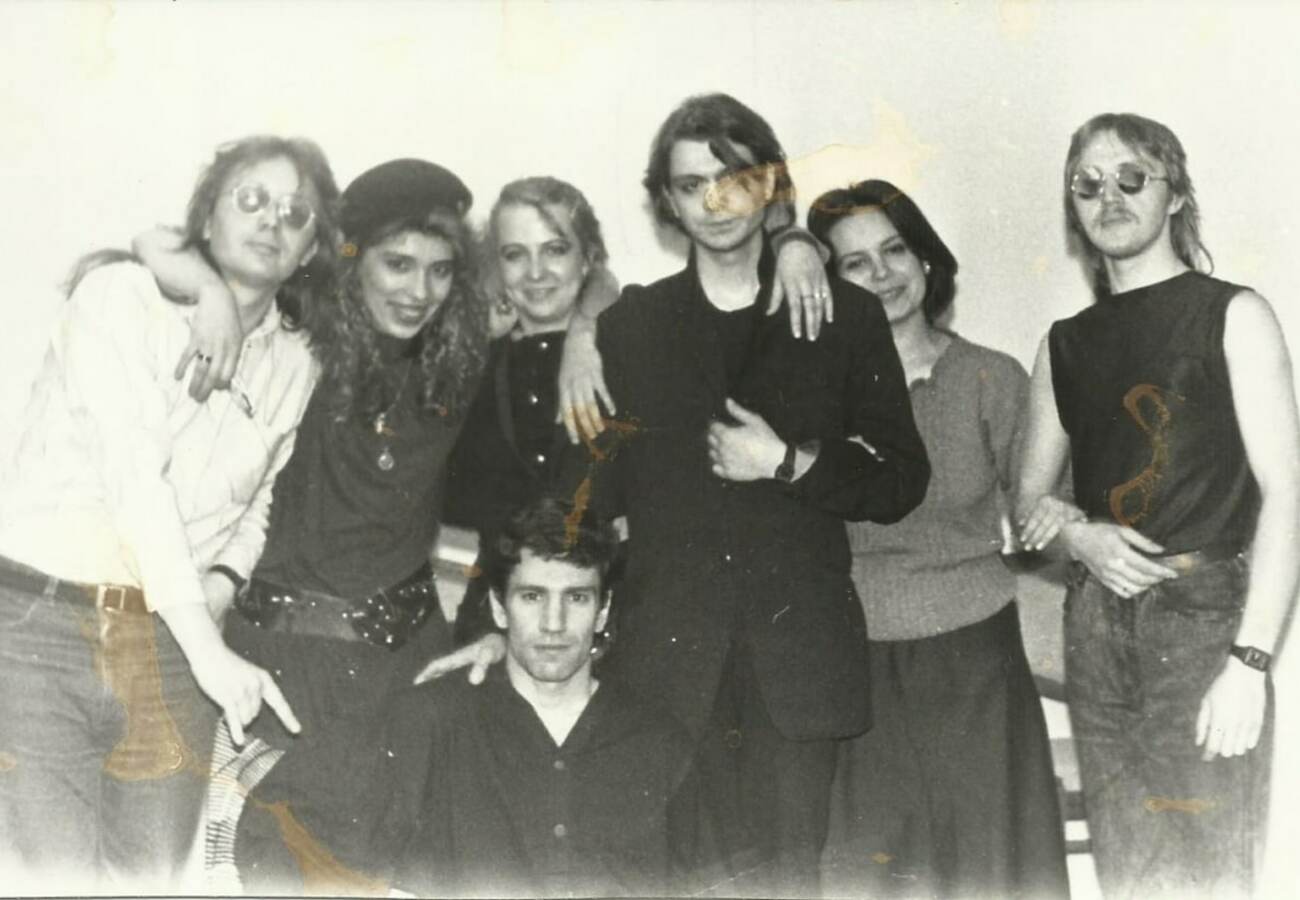 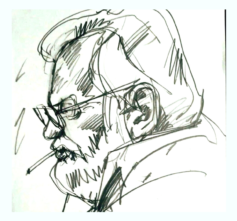 Uładzimir Mackievič‘s friends and colleagues have created a special page on Facebook, which will be maintained on his behalf, to continue the dialogue and find a way out together.

A new series of programs has been launched on the Good Channel. In the first episode, actor Alaksandr Ždanovič reads an excerpt from the work by Jan Barščeŭski “A nobleman Zavalnia, or Belarus in fantastic stories”. 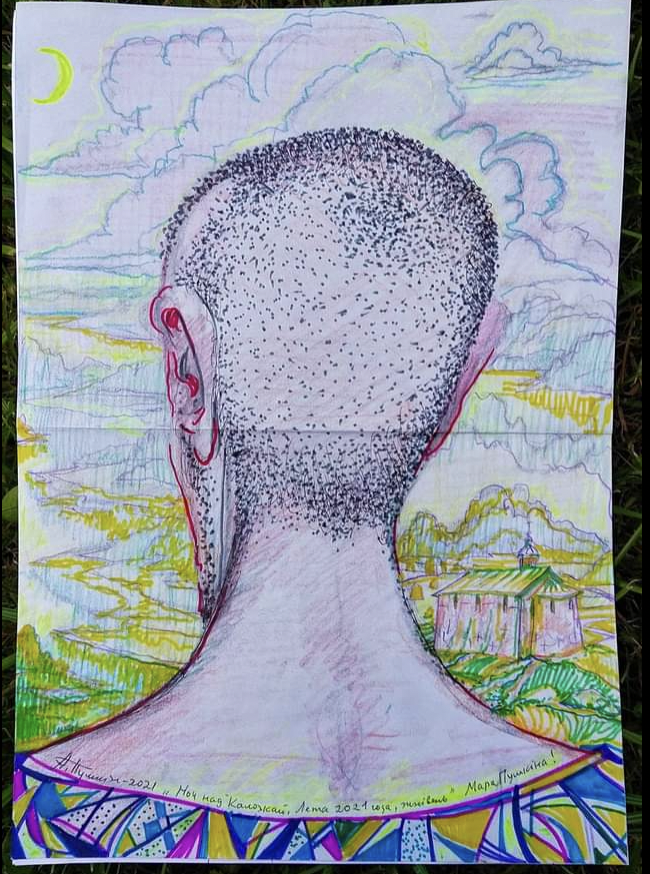 A festival of poetry and a folk festival took place in Hrodna region on August 28.

The Museum of Belarusian Book Printing in Polack opened an exhibition to the 85th anniversary of Hienadź Buraŭkin, dedicated to the life and work of the famous poet, public figure, the first representative of independent Belarus to the UNO. 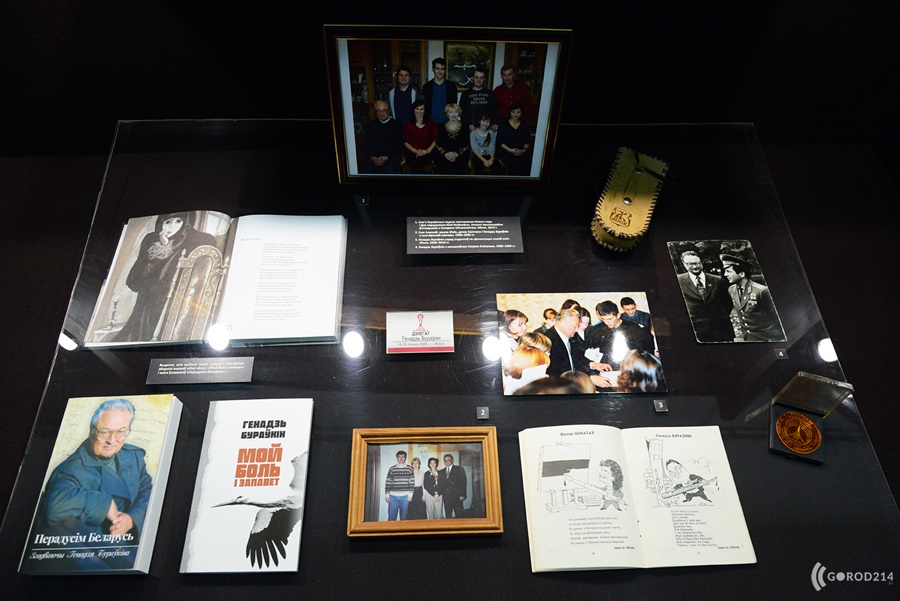 In Drahičyn, an old Belarusian town known from the 15th century, people managed to get three streets in the city to take names associated with the region, while the city authorities planned to call them by names and realities associated with Russia.

Naviband in a creative collaboration with Ryan O’Reilly, have released an English version of their song “A Girl in White”.

Alex Kliuchko, a Belarusian designer studying at the Metropolitan University of Oslo, created her graduation collection GenerationЎ inspired by Belarus’ history; each item has implicit meaning, some sort of code that viewers are invited to decipher.

The National’s Anti-Crisis Administration, headed by Pavieł Łatuška, sent an appeal to UNESCO, calling to pay attention to the repressions against culture and cultural figures in Belarus and support Belarusians. 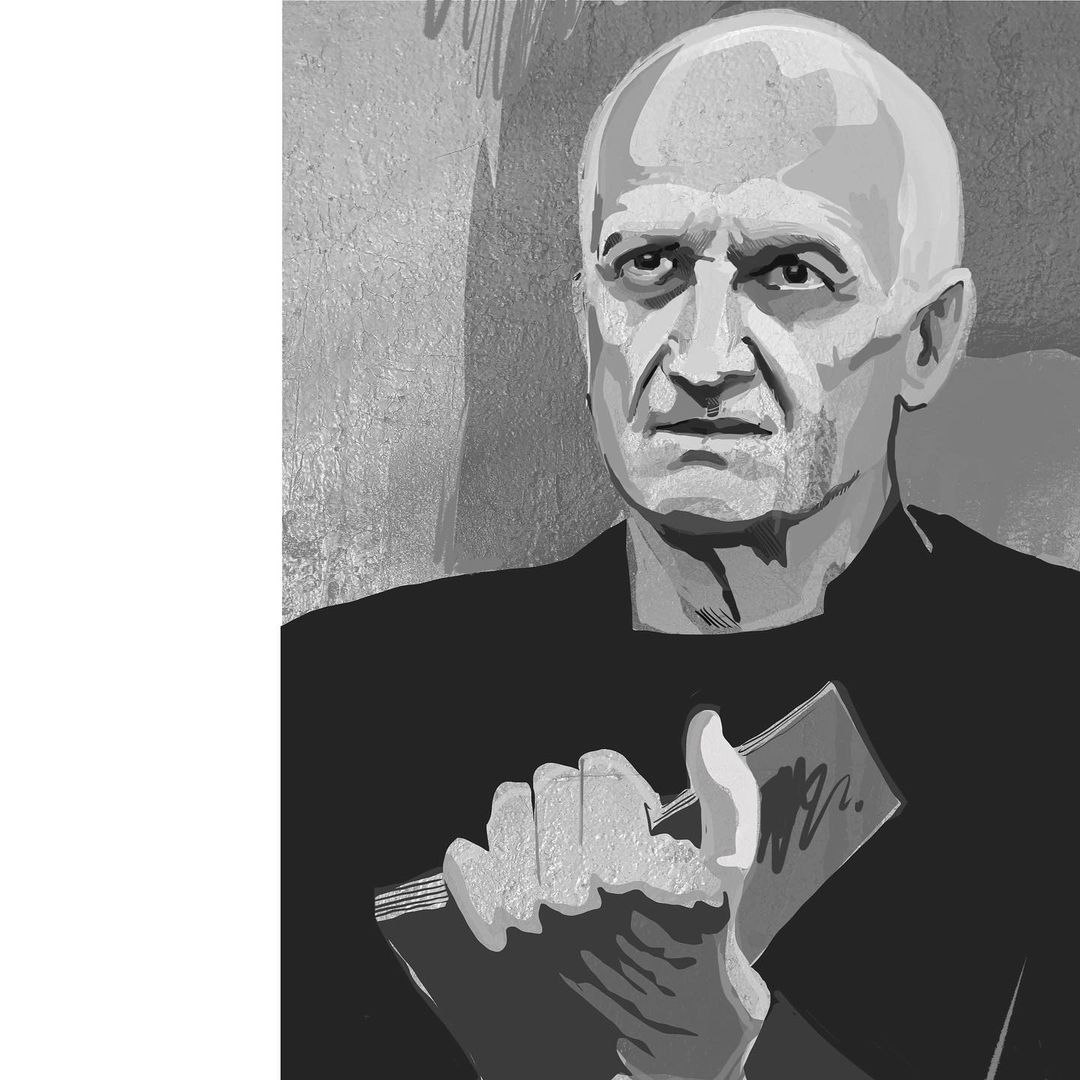 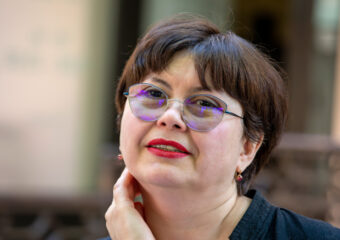 “In Belarus now, you don’t even need to do anything illegal in order to be thrown in jail. Each of us today, tomorrow, the day after tomorrow can get there. But that doesn’t mean we have to stop working. I believe it all makes us stronger. No one from the editorial office has left the country yet and is not going to. We all work here.” 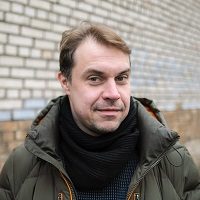 “My personal gestalt has been closed, strangely enough. What matters for me is that now the time of Łukašenka’s rule will no longer be identified with the times of humble degradation, when the majority supported him. Now everyone knows he’s no hero. Whoever writes history textbooks in the future, the truth of what he did will stay. Just like what people did. I’m delighted that Łukašenka”s dictatorship of bad taste and violence has shown the world its face.” 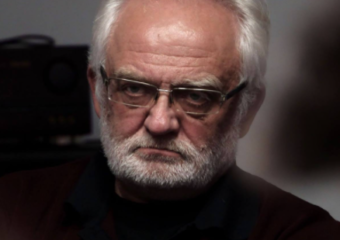 Uładzimir Mackievič, philosopher and methodologist, one of the most prominent intellectuals of modern Belarus, while in the pre-trial detention center in Minsk, answered in writing DW’s questions about his attitude to the accusation, development of the situation in the country and addressed Belarusians,

“The regime has arrested the leaders, suppressed and frightened the activists, realized it would stay unpunished, so it gets at everything that is a source of any change and progress, threatening dictatorship and arbitrariness. There came the turn of free thought as well. Repression against philosophers and intellectuals is typical of totalitarian regimes that claim to completely restructure the world, while for authoritarian regimes it’s more of a casus, bad shot. But once the regime went for it, it put itself on a par with the most inhumane regimes of the twentieth century.” 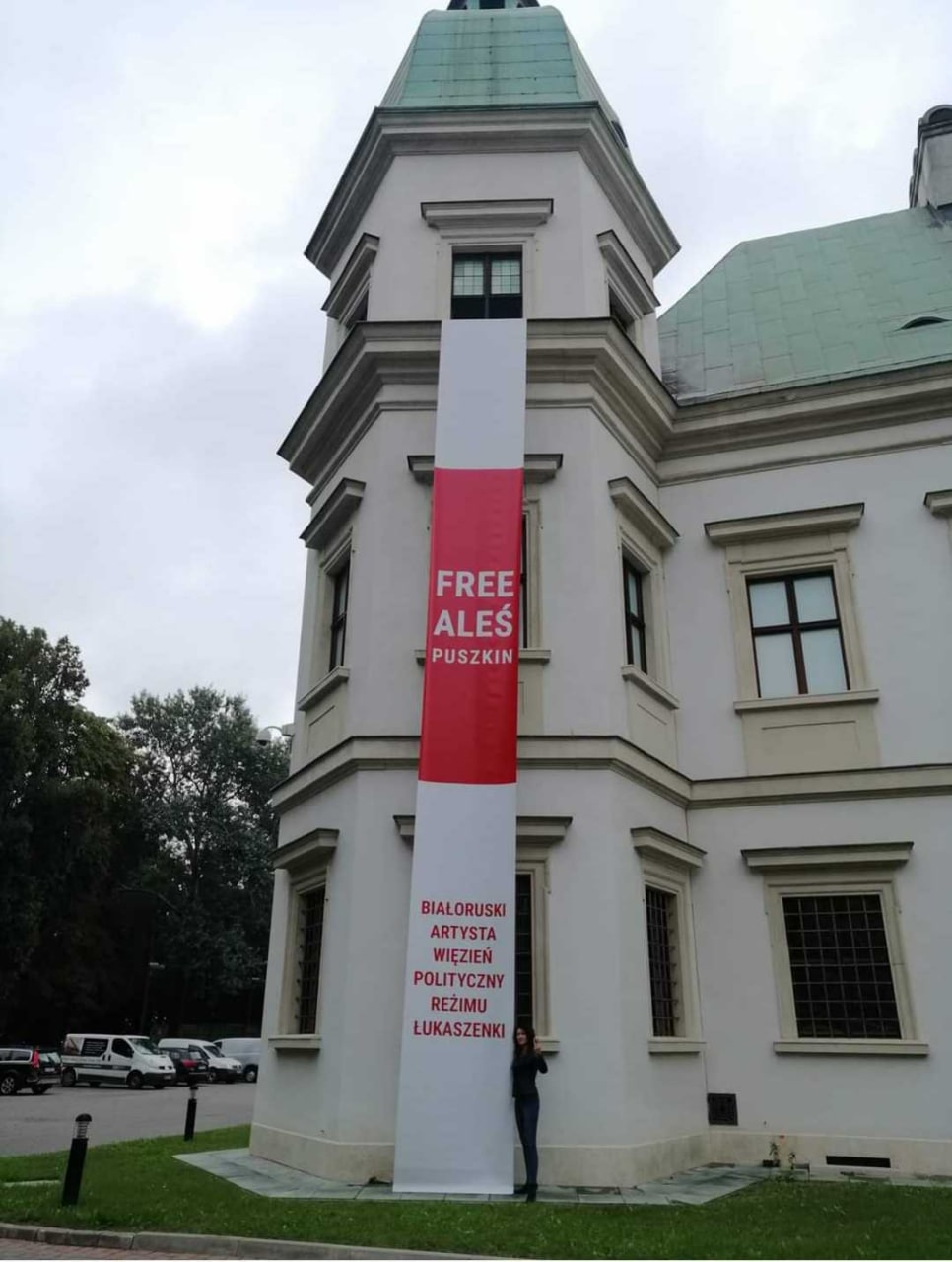 A banner in Warsaw

An online exhibition about the post-election year in Belarus – in Ukrainian and English.

An article about Anastasija and Viktoryja Mironcavy, political prisoners, artists, was published in the Checz media Denikn.

A banner calling for the release of Belarusian artist Aleś Puškin appeared on the building of the Zamek Ujazdowski Center for Contemporary Arts in Warsaw. 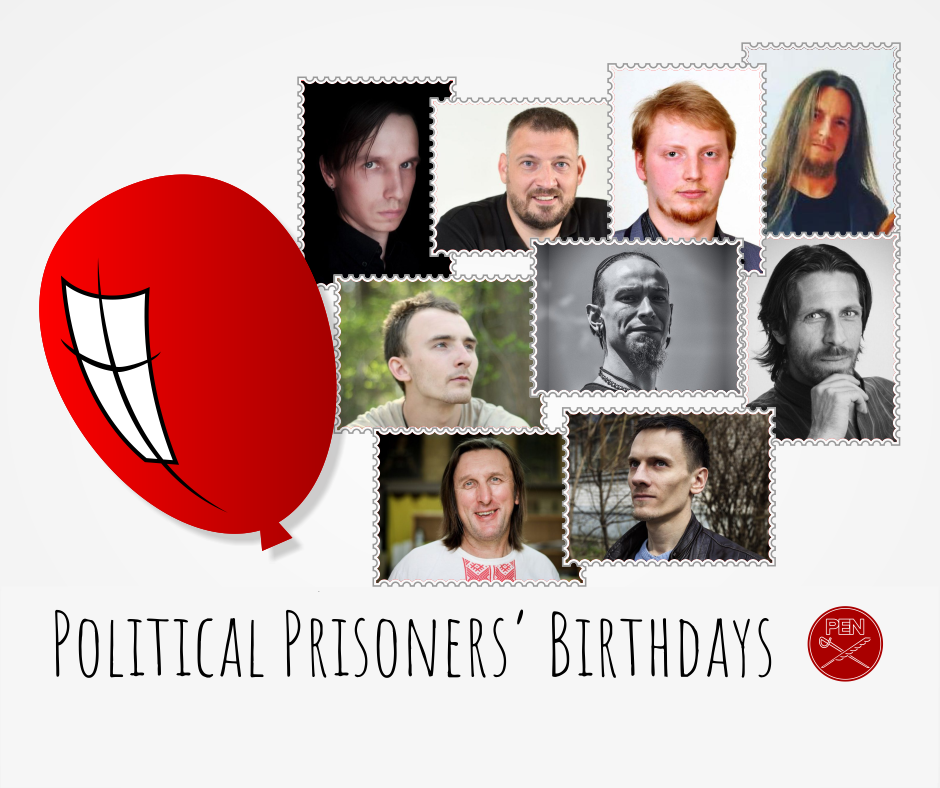 See the link for the addresses for postcards and letters.