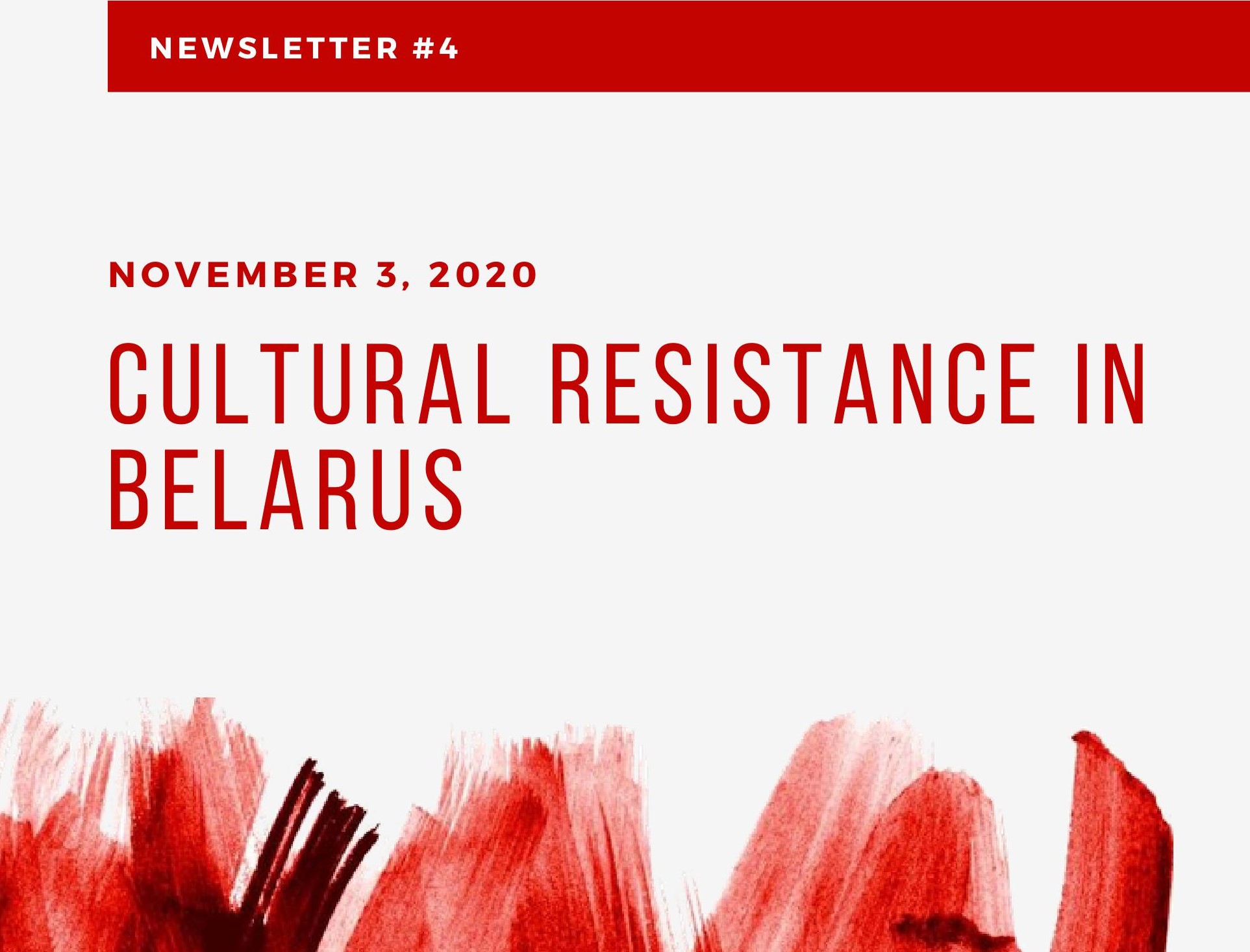 The “people's ultimatum” expired on October 25, and many cultural figures, sometimes entire collectives, joined the nationwide strike. There’s been an escalation of pressure, but the regime can’t restrain the freedom of thought and creativity any longer.

The Belarusian Cultural Solidarity Foundation called on all cultural figures to join the National Strike, and for our colleagues abroad to organize solidarity actions in order to give Belarusians moral and financial support. For donations, please refer to the Facebook page of the BCSF or donate via this page.

Eduard Akulin, a poet and bard, was detained on October 26 in Minsk as he was standing in a solidarity chain. On October 27, his case was sent for reconsideration.

Alena Hironak, an actress, was detained during peaceful protests in Minsk on October 26. In the evening of the same day she was released after a report had been drawn up.

“In the police van, a man was lying in the aisle. I said I wasn’t going to move forward until they picked up the man. They hit me on my head several times, dragged me in, and tightened my hands with a strainer behind my back”, Alena told Radio Liberty/Radio Free Europe about the circumstances of her detention. 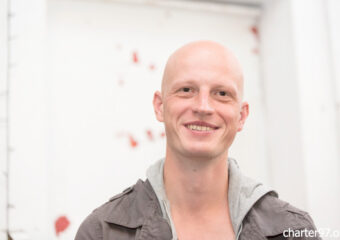 Ihar Alinevich, a former political prisoner and activist of the anarchist movement, laureate of a PEN Belarus award and a Viktar Ivashkevich National Prize for Human Rights, was detained while crossing the state border of Belarus on the night of October 28-29.

The circumstances of his arrest haven’t been known yet. Ihar is now in the KGB detention center and he, together with two other activists of the anarchist movement, is sewed ′′ by Article 289 of the Terrorism Act and the article. 295 ′′ Illegal arms turnover ′′ of the Criminal Code of Belarus.

Halina Kazimirouskaya, a director of the Concordia choir and wife of a Belarusian musician Zmitser Vaitsiyushkevich, was arrested on October 29 right from her office by plainclothes men. On November 2, Halina was fined 60 basic units (526 Euro).

Pyotr Marchanka, a guitarist of a Belarusian fantasy folk band Irdorath, which has become quite legendary over the last months due to playing their music in the crowd on Sunday marches, was detained during such a march on November 1. The following day, he was fined 15 basic units (131 Euro). 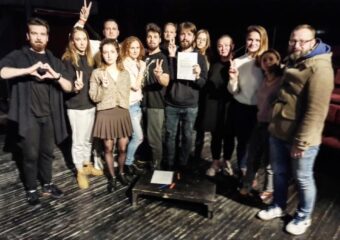 For October 30, 12 actors and actresses have been fired from the Hrodna Regional Drama Theatre for joining and supporting the nationwide strike.

All of them call for restoring the law in the country, releasing political prisoners and holding new transparent elections.

All the upcoming shows and rehearsals in the theatre have been canceled.

A number of key musicians have been dismissed from the National Academic Bolshoi Opera and Ballet Theatre in Minsk for supporting the “people’s ultimatum” and signing the Open Letter from the Belarusian Arts and Culture Community. They are a conductor Andrey Halanau, the leading soloist of the theatre, laureate of 16 international vocal competitions Ilya Silchukou, the first violin of the orchestra Rehina Sarkisava, a violinist Ala Dzhyhan and a violist Aliaxandra Patsiomina.

“I just do what I have to do, what my heart and conscience tell me. Of course, being fired doesn’t make me happy, there is uncertainty about the future, but what can you do, it’s how all Belarusians live now. My conscience is dearer to me than other things,” Ilya Silchukou said in his interview to Nasha Niva.

Andrey Novik, the leading actor of the Republican Theatre of Belarusian Drama, resigned in solidarity with the strikers and the repressed on October 29. He explains his action by saying that he does not have the strength to go on stage at the state theatre when his colleagues are “thrown out into the street at best.”

Three students, Serafim Hanichau, Aliaksandar Danilkin, and Karyna Chakur, have been expelled from the Belarusian State Academy of Arts on October 27 for taking part in the rallies in solidarity with the nationwide strike. Alena Bokhan, the academic director, refused to sign the expulsion order, commenting that she was “against expelling students because of their civil position”, but that is unlikely to help. Teachers and staff of the Academy of Arts have been signing an open letter urging the institution’s leadership to stop persecuting students and staff who express their civic position, to restore expelled students and stop interfering with peaceful assemblies. 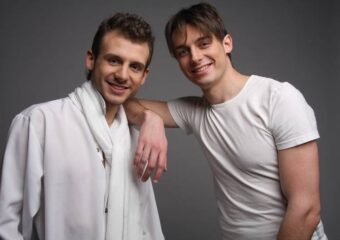 The concert of the band Litesound, scheduled for November 13 in the Minsk Concert Hall, was canceled due to a “governmental event” that is supposed to take place there on the date. Litesound has openly condemned the violence of the security forces after the August 9 election.

The band has also supported the “people’s ultimatum” and urged its audience to refrain from visiting cultural institutions.

On October 27, the fired cultural figures staged a flash mob in the large hall of the Belarusian State Philharmonic. Before the performance began, they came up to the stage with signs “We are not slaves” and “Culture against violence”, after which they chanted “Long live Belarus!” and the audience changed back.

On October 27, at the National Academic Bolshoi Opera and Ballet Theatre in Minsk, before starting to perform, the orchestra stood up and made a statement to the audience that it was difficult for them to perform when there had been so much violence in the country. Most people in the audience supported them with chanting “Long live Belarus!”, and the Free Choir sang “Mahutny Bozha” (Belarusian for “Mighty God”), a song off the poem written by Natallia Arsiennieva in 1943 which became a religious anthem of Belarusian immigrants and was proposed as the national anthem of the independent Belarus in the 1990s. It has been sung multiple times in public places over the months of protests following the presidential election and was forbidden by Metropolitan Benjamin two weeks ago.

On October 29 in Kurapaty, the event “Night of the Executed Poets” took place despite the arrest of one of the organizers – an activist, writer, and former political prisoner Zmitsier Dashkevich. He was arrested during a rally on October 25 and sentenced to 15 days in jail. Athletes, scientists, workers, and cultural figures recited poems by Belarusian poets who were shot that day in 1937.

Kurapaty is a wooded area on the outskirts of Minsk, in which a vast number of people were executed between 1937 and 1941 during the Great Purge by the Soviet secret police, the NKVD. On the night of 29-30 October 1937, over 130 representatives of Belarusian national elite were executed, among them 22 young writers. Their manuscripts and correspondence were burnt in the prison yard. A whole generation of writers was annihilated overnight, their families sent off to camps.

This year’s commemoration event had a special significance because of the parallels with the repressions of the last months. They are links in the same chain. 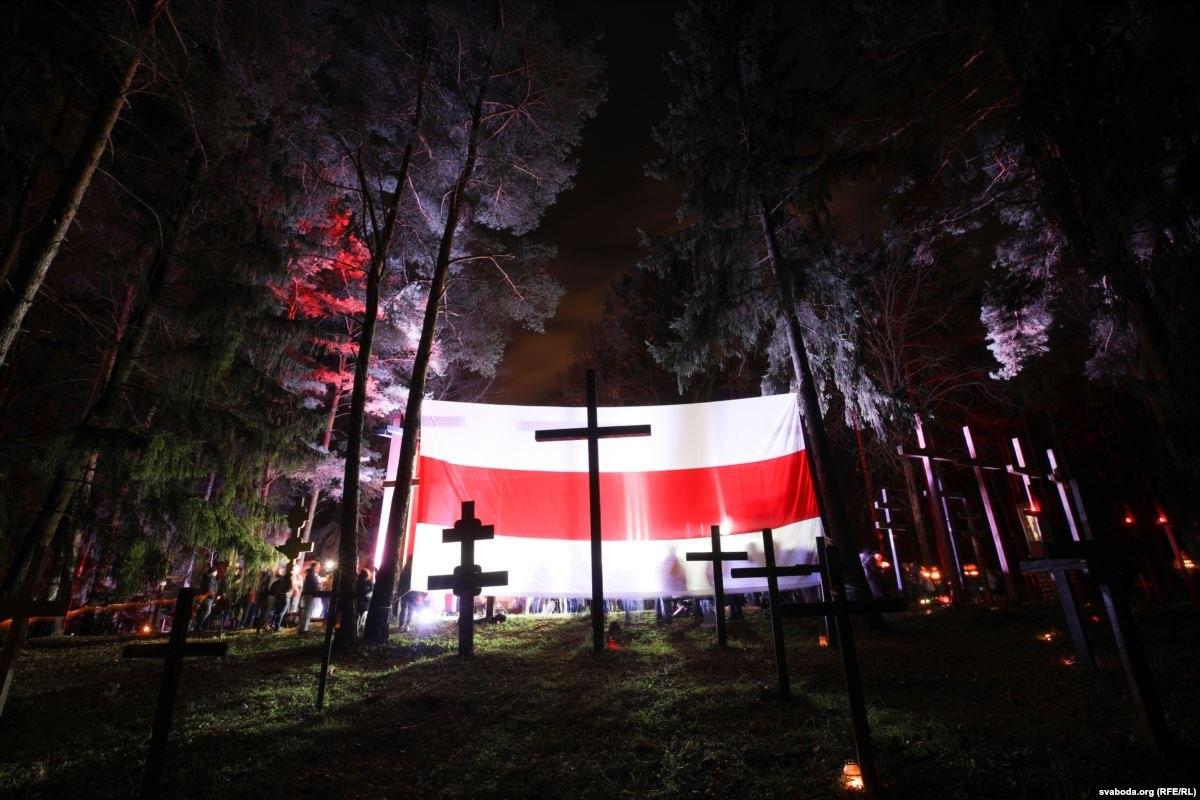 Belarusian opera star Ilya Silchukou, who was fired from the Bolshoi Opera and Ballet Theatre on October 28 for his civic stance, recorded a song Mahutny Bozha, it’s very powerful, just the way an anthem should be. And the video clip with the protests turned out fantastic. Follow the link to see the video.

Neighbourhood communities don’t give up, and in addition to music, lectures, and performances, they’ve been also filling up with poetry…

The famous Belarusian conductor Viachaslau Volich, who was appointed chief conductor of the National Opera and Ballet Theatre on August 24 and resigned on August 26 and is now in Ukraine, said in an interview that he was not going to return to Belarus for he worries about his safety. Viachaslau also expressed solidarity with the musicians fired from the Opera House:

“I stand together with my colleagues who have expressed their attitude to what is happening in the country. This is a courageous act. There is no politics in it. There should be a diversity of opinions in a society. No development is possible without consensus. The repression shows only the weakness of the government.”

At the end of the summer, an auction of works by 30 Belarusian artists was organized by Vladey House, the largest platform in Russia that sells contemporary art. A large proportion of the funds raised have been directed to the people affected by the crackdown on protests in Belarus.

A concert of solidarity #ЖывеБеларусь with the participation of Belarusian opera singer Marharyta Liauchuk and Lithuanian pianist Justas Chaponis took place in Vilnius on October 29. Follow the link to see the recording.

You can make a donation to the Belarusian Culture Solidarity Foundation which provides support to Belarusian cultural figures fired in Belarus.

A poetry reading in solidarity with the Belarusian resistance movement took place in the Art Museum of Malmö. Poems by Valzhyna Mort, Yulia Tsimafeeva, Dmitry Strotsev, Hanna Komar and others were read out in Swedish translations. The event was organized by a poet Ida Börjel, publisher Per Bergström, and translator Mikael Nydahl.

The Swedish Royal Theatre in Stockholm as part of the International Theatre for Solidarity with Belarus project “Offended. Belarus(sia)” presented a play by Andrey Kureichyk about the events in Belarus. Earlier readings of the play were held in Kiev, Hong Kong, Antwerp, London, Los Angeles, Prague, and a dozen other cities.

“The fact that such theatres show active support of the Belarusian people, Belarusian drama, the fact that on this famous stage “Mury” [a protest song] sounds and a huge national [white-red-white] flag is flying, that ministers and politicians come to see the truth about our protests means a lot,” said Andrey Kureichyk.

Lithuanian National Opera and Ballet Theatre has invited conductor Andrei Halanau and Opera soloist Ilya Silchukou, who have been fired from the Bolshoi Theatre in Minsk, to take part in its production.

The American band CocoRosie in collaboration with a Belarusian artist and performer Iryna Anufryieva recorded a protest song Go Away and published a music video for it.

Two well-known Belarusian musicians, Ihar Varashkevich and Yury Stylsky, have provided items for a charity auction to help Belarusian Culture Solidarity Foundation created to support representatives of the Belarusian cultural community who have suffered for their civil position.

The leader of the legendary rock band “Krama” Ihar Varashkevich is selling his guitar which he used to compose some of his cult songs.

Yury Stylsky is selling his self-portrait.