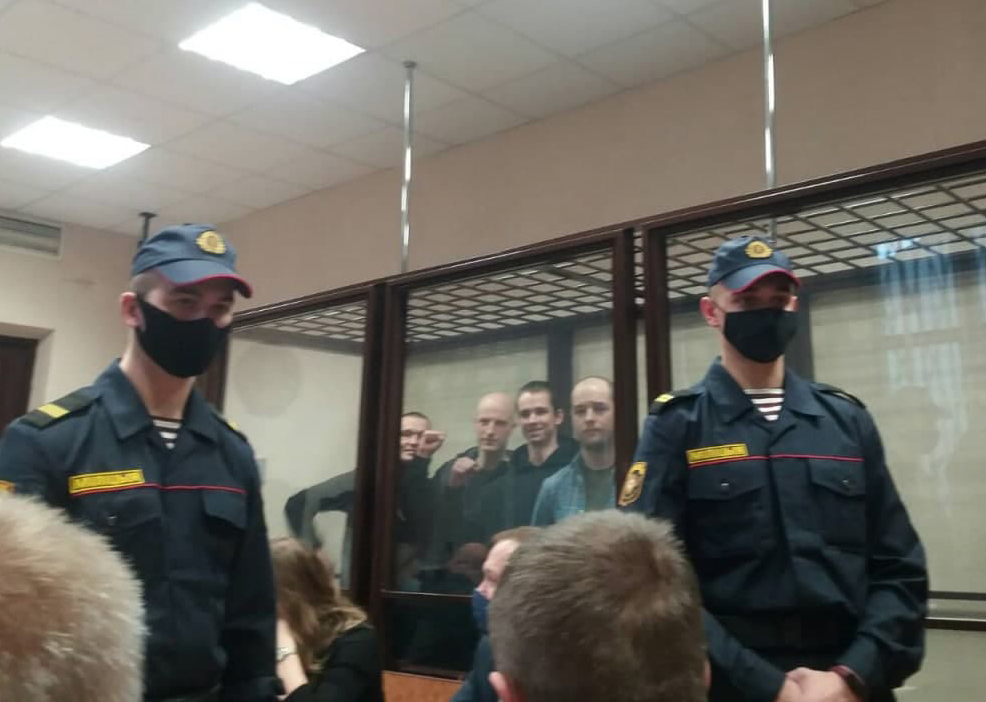 Photo: spring96.org/
Statement by the human rights community in Belarus

We, representatives of the human rights community in Belarus, note that in politically motivated cases, the authorities use, disproportionately and selectively in comparison with other cases, imprisonment in violation of the right to a fair trial, other rights and freedoms guaranteed by the International Covenant on Civil and Political Rights. Fairness of trial entails the absence of any direct or indirect influence, pressure or intimidation or intrusion from whatever side and for whatever motive.

Thus, the criminal case against Dzmitry Dubouski, Dzmitry Rezanovich, Ihar Alinevich and Siarhei Ramanau on charges of committing acts of terrorism (Part 2 of Article 289 of the Criminal Code) and illegal arms trafficking (Parts 2 and 4 of Article 295 of the Criminal Code), as well as on the charge of the illegal movement of prohibited substances across the border faced by Ihar Alinevich and Siarhei Ramanau (Part 1 of Art. 333-1 of the Criminal Code), was considered by the Minsk Regional Court behind closed doors without any legal grounds for this. The accused were sentenced to 18, 19, 20 and 20 years in prison, respectively.

Accoding to the International Covenant on Civil and Political Rights, in the determination of any criminal charge against him, everyone shall be entitled to a fair and public hearing by a competent, independent and impartial tribunal established by law. All or part of the public may be excluded from a trial for reasons of morals, public order or national security in a democratic society, or when the interest of the private lives of the parties so requires, or to the extent strictly necessary in the opinion of the court in special circumstances where publicity would prejudice the interests of justice. Apart from such exceptional circumstances, a hearing must be open to the general public, including members of the media, and must not, for instance, be limited to a particular category of persons. Even in cases in which the public is excluded from the trial, the judgment, including the essential findings, evidence and legal reasoning must be made public. These requirements were not fulfilled by the court in the case of the persons mentioned above, which in itself could determine the attitude of human rights defenders to the results of the hearing.

In addition, we would like to stress that everyone charged with a criminal offence shall have the right to be presumed innocent until proved guilty according to law. The presumption of innocence, which is fundamental to the protection of human rights, imposes on the prosecution the burden of proving the charge, guarantees that no guilt can be presumed until the charge has been proved beyond reasonable doubt, ensures that the accused has the benefit of doubt, and requires that persons accused of a criminal act must be treated in accordance with this principle. It is a duty for all public authorities to refrain from prejudging the outcome of a trial, e.g. by abstaining from making public statements affirming the guilt of the accused. Defendants should normally not be shackled or kept in cages during trials or otherwise presented to the court in a manner indicating that they may be dangerous criminals.

However, state propaganda media have repeatedly expressed and imposed the idea of ​​the proven guilt of the listed persons long before the end of the investigation and trial. This became possible, among other things, due to the fact that the investigators shared the preliminary investigation materials with the indicated media.

It is also obvious that in the context of widespread violation and restriction of lawyers’ rights, the defenders of the accused could not exercise their professional functions in an atmosphere of freedom and in the absence of direct pressure and intimidation, they did not have sufficient opportunities to perform their professional duties, including access to all case materials and the ability to freely meet with their clients.

Under domestic legislation, the actions of the accused are qualified with an excessively grave corpus delicti, “Act of terrorism”. The Criminal Code defines an act of terrorism as “the commission of an explosion, arson, flooding or any other action endagering the lives of people, causing personal injuries or entailing other socially dangerous consequences, if these actions have been committed for the purpose of exerting influence on decisionmaking by governmental bodies, obstructing political or other social activities, intimidating the population, or violating public security. However, this definition concerns lawful and legitimate activities of the authorities in a democratic public order, not the practice of violence and repression amid the totalitarian social order, which Belarusian authorities turned to after August 2020. Therefore, it would be correct to qualify the facts of property damage imputed to the accused under the relevant article of the Criminal Code, taking into consideration the clearly identified circumstances of each episode.

The punishment imposed on the accused is excessive and is not justified neither by the social danger of the deed, nor the personal data of the accused.

At the same time, we declare that we strongly condemn the use of violence to achieve political goals, but we stress with regret that in the situation that developed in Belarus after the presidential elections in 2020, acts of violence and property damage were often the result of numerous and widespread human rights violations by the authorities, the lack of freedom of expression, as well as the disillusionment with peaceful ways of changing government in fair elections caused by the authorities’ demonstrative disregard for democratic values and procedures, as well as the authorities’ reluctance to turn to the legitimate use of law to protect citizens’ violated rights.

Having studied this case, we came to the conclusion that the prosecution of the accused is politically motivated and caused by the law enforcement, judicial and other authorities’ actions or inaction that are unacceptable in a democratic society and aimed solely at strengthening or retaining their power.

According to the Guidelines on the Definition of Political Prisoners, a person deprived of liberty is to be regarded as a political prisoner, if, along with the political motivation of their case, at least one of the following criteria is observed:

1) the detention has been imposed in violation of the right to a fair trial, other rights and freedoms guaranteed by the International Covenant on Civil and Political Rights or the European Convention for the Protection of Human Rights and Fundamental Freedoms;

2) the length of the detention or its conditions are clearly disproportionate (incommensurate) to the offence the person is suspected, accused or has been found guilty of;

We, representatives of the Belarusian human rights community, consider that the persecution of Dzmitry Dubouski, Dzmitry Rezanovich, Ihar Alinevich and Siarhei Ramanau is politically motivated, and recognize them as political prisoners. In this regard, we call on the Belarusian authorities to: