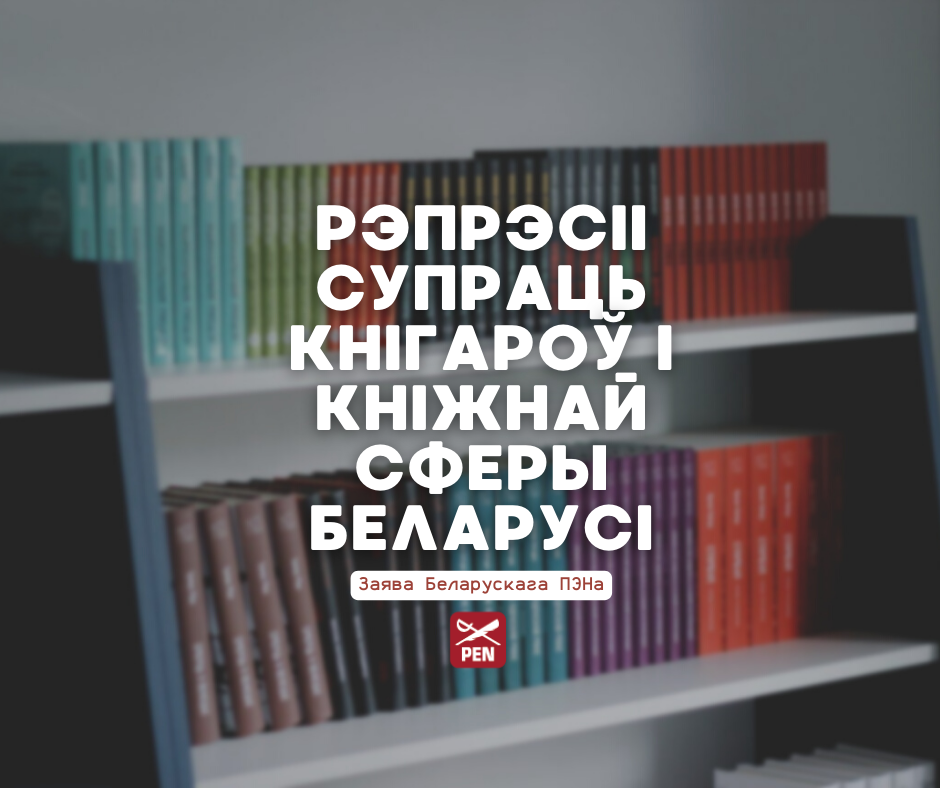 The independent publishing sector in Belarus not only exists under a difficult environment, but also is subject to large-scale repression, affecting both the production and distribution of book products.

On one hand, the lack of state support, high taxes (even in comparison with the neighboring countries), and high commercial prices for book production despite the absence of a book market in Belarus affect the final cost of Belarusian books and makes it very expensive for the consumer. The formation of a national book market is likewise complicated by the widespread representation of Russian-published books in Belarus. Taking into account the current events in the region and in the country, the general circumstances of the Belarusian cultural sphere are dominated by Russian cultural occupation, and this is no exaggeration.  The cultural sector is greatly impacted by the promotion of the ideology of the “Russian world”, and involves the extermination of everything Belarusian.

On the other hand, authors, publishers and employees of publishing houses, book distributors and literary observers all face repression on a constant basis. Writers disloyal to the authorities are unable to meet with their readers, cannot distribute their books at bookstores, and are mentioned in the state media only for the sake of propaganda and defamation.

In 2021, two public associations which, among other things, were engaged in the development of Belarusian literature and the book market, were liquidated: PEN Belarus and the Union of Belarusian Writers. In January 2021, the Belarusian regime began organizing searches of publishing houses and their employees in a systematic manner. The law-enforcing bodies conducted searches in the publishing houses Janushkevich and Knigazbor and at the Belarusian book distribution site knihi.by. During searches, they confiscated equipment. During the attempt of the Janushkevich publishing house to transport 1000 copies of Alhierd Bacharevič’s novel Dogs of Europe across the border for circulation, the entire printing was confiscated. On 17 May 2022, the court of Minsk district recognized this book as extremist. The publishers’ bank accounts were blocked.

In 2022, over the course of a single month, the activity of at least four independent publishing houses was stopped: “Goliaths” (from 18.04.2022), Medisont (from 15.04.2022), and Limarius and Knigazbor (from 16.05.2022). The justification for terminating the activity of all 4 publishing houses is the same: “violation of the term for notifying the Ministry of Information about the change of information for inclusion in the State Register of Publishers, Producers and Distributors of Printed Publications”.

At the beginning of May, the Janushkevich publishing house announced the opening of a bookshop called Knihauka in Minsk, scheduled for 16.05.2022. In a situation when the presence of independent Belarusian books in the public space is almost zero and more and more books by Belarusian authors are banned unofficially or publicly (via  inclusion in the list of extremist material), this news greatly excited readers of Belarusian literature.

On 16 May 2022, on the very first day of Knihauka’s operations in Minsk, pro-government propagandists came to the bookstore and publicly accused Andrej Januškievič of selling “wrong” literature which “glorifies Nazism”, all while recording the conversation on camera. Andrej Januškievič was also accused of “open anti-state activity”. The propaganda media published a number of defamatory posts about the work of the shop, the books themselves, and the authors of the books sold there. In the afternoon of the same day, the bookstore was searched. During the search 200 books were confiscated, 15 of which were sent for examination to determine whether they had signs of extremism. The publisher Andrej Januškievič and an employee of the publishing house, literary reviewer and blogger Nasta Karnackaja, were detained. Januškievič was arrested for 10 days and Karnackaja for 13 days for alleged ” disorderly conduct”. Andrej Januškievič and Nasta Karnackaja were not released after the end of their administrative arrests. In Belarusian practice, this can mean either another impending administrative arrest or the initiation of a criminal case. The situation is complicated by the fact that, as is the case of other political prisoners, their lawyers are under a non-disclosure agreement, which forms an information vacuum and makes it impossible to know the exact legal status of people in custody and their current location. We are convinced: the crime committed by Karnackaja and Januškievič is simply that they worked for the development of Belarusian culture.

The events described above have ideological and political implications. The ongoing, consistent destruction of independent book stores and publishers in Belarus paired with brutal repressions against publishers and distributors of independent books leads to almost total limitation of the readers’ access to independentBelarusian books, even the books in high demand

Belarusian PEN thus concludes that the state directly prevents citizens from participating in cultural life and impedes the development of culture and the distribution of cultural products. The state does not take appropriate measures (no spending of funds, no spreading of information) to fully realize the right of citizens to participate in cultural life. Cultural activities are subject to censorship. The ability to choose one’s own cultural identity is being destroyed. Publishers suffer from discrimination in the choice of language and themes of books. In doing so, the state violates par. 1, 2, and 3 of Article 15 of the International Covenant on Economic, Social and Cultural Rights.

Belarusian PEN demands the immediate release of Nasta Karnackaja and Andrej Januškievič and an end to all persecution for cultural activities and for stating opinions different from those officially adopted.